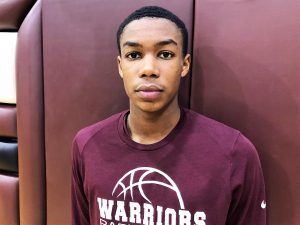 There are dozens of players from Cape May County high schools who have scored more than 1,000 career points over the years. The list shrinks rather significantly, however, when it comes to 2,000 career points. There are just five.

Kyion Flanders is on the cusp of becoming the sixth.

Flanders, a 6-1 senior guard from Wildwood High School, enters this week 74 points shy of the magic number. With three home games this week – Triton Tuesday, Pitman Thursday and Lower Cape May Saturday – there’s a decent chance Flanders can hit the milestone in front of the home crowd. If not, it could come Monday at Ocean City.

“I’ve thought about it,” Flanders admitted. “Obviously it’s something that’s big for me but it’s also big for the school. To be the first person that would score 2,000 points as a boys basketball player here would really be special to me.”

Flanders is already the program’s all-time leading scorer. He broke 1989 graduate Brendan Conner’s school record of 1,811 a couple of weeks ago. But that came in a heartbreaking loss to local rival Cape May Tech, so Flanders and the Warriors weren’t in a mood to celebrate that accomplishment much.

But 2,000 points? That, no matter how or when it comes, will be well worth acclaiming.

“Looking at everyone else that got 1,000 and seeing all the great players on that 1,000-point board (that hangs in the school’s gym) and even knowing some of the guys that have done it at other schools, to be able to be up there with them and pass some of them, it’s a really good feeling,” Flanders said.

Brothers John and Dan Leahy are the only male high school basketball players to surpass 2,000 career points while playing their entire careers for Cape May County high schools. Dan finished his four-year career at Wildwood Catholic in 1988 with 2,030 points, while John ended at Middle Township in 1990 with 2,139 points after playing his first two seasons at Wildwood Catholic. LaMarr Greer, a 1994 graduate of Middle, scored the most points overall by anyone who played for a county high school at 2,637 points, but Greer spent his first two high school seasons at Overbrook in Pine Hill.

The only female high school basketball players to reach 2,000 career points at Cape May County high schools are 2002 Wildwood graduate Monica Johnson, who holds the South Jersey record with 3,173 points, and 2015 Lower Cape May graduate Lauren Holden, who posted 2,476 points.

Flanders is next in line to join those all-time greats.

“When you’re talking 2,000 points, that’s a really big number,” Wildwood coach Scott McCracken said. “Coaching this kid for four years, he’s really a special player. He can really play. He can shoot it from the outside and he can drive it to the rim.”

Flanders entered Wildwood talented but undersized. He still managed to contribute as a freshman and became a full-time starter as a sophomore.

“Coming in as a freshman, I was pretty small and we had a pretty good team so it was tough for me to score that year,” Flanders said. “I only had around 200 points as a freshman and then maybe 500 as a sophomore so I never thought I could get close to 2,000.”

But then Flanders exploded as a junior, leading the state in scoring average at 28.8 per game. This season, he’s currently scoring at a 23.6 points per game clip as teammates Tyler Tomlin and Marquel Matthews have emerged as capable secondary scoring options for a Wildwood team that enters this week at 10-7 and is tied for first place in the Tri-County Classic Division.

While Flanders has been a volume scorer through much of his career, he’s done it by being a rather efficient shooter. For example, he made 20 of 25 shots from the floor when he scored a school-record 46 points in a win over Clayton on Jan. 25. And last Thursday at Penns Grove, he made 13 of 20 shots en route to a game-high 34 points. Last season, he shot approximately 48 percent from the floor.

“Kyion will work the ball to his teammates and his shot selection has improved every year,” McCracken said. “He has that quickness going to the rim, he has a quick release and he has that step-back move where he can go up and make shots over people. That makes him so difficult for people to guard.”

Flanders is generating lots of college interest. Stockton, Rowan and Penn State-Harrisburg had scouts in attendance at Friday’s game at Penns Grove. Stockton coaches have been to just about every Wildwood game this season.

“He was unbelievable against Penns Grove,” McCracken said. “That’s a really hard place to play and they have a really good team. But he was the best player on the floor and it wasn’t even close.”

Wildwood was 6-18 during Flanders’ first season as a full-time starter. Last year the Warriors jumped to 22-7, winning a share of the Tri-Co Classic title and advancing to the South Jersey Group I semifinals. This season could produce another division title and a good playoff run.

“The team’s being doing great the last couple years,” Flanders said. “I feel like we’ve been getting better. The coaches tell me I’m a big part of that. That’s a great feeling for me to hear that.”