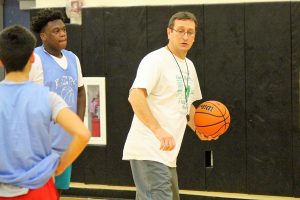 Scott Holden guided the Lower Cape May Regional High School boys basketball team to an excellent finish in his first season as coach.

Eight years later, he did so in his final season as well.

Holden, who led the Tigers in one of the program’s finest seasons this winter, has resigned after eight seasons at the helm.

“There’s a couple of reasons,” Holden said of his decision to resign. “One is selfish. I’d really like to see my niece (Lauren Holden) and nephew (Pat Holden) play in college.

Lauren recently completed her junior season at Fordham. Pat, his uncle’s star guard for the past four seasons, is set to play Division III college basketball but has yet to officially announce his choice of school.

“The other aspect,” Holden added, “is that I just feel like maybe I could be more helpful to Lower basketball if I went to a lower level and help build things at that level and be a feeder coach. Whether that’s in the school (system) or in the rec program, it doesn’t matter to me. I just would like to help at the lower level.”

The bookends of Holden’s high school coaching tenure at Lower Cape May were an unequivocal success.

After four seasons as an assistant coach under his older brother, Pat, Holden took over as head coach beginning with the 2010-11 season. Lower went 19-8 that season.

The Tigers were a competitive 13-13 the following season but then endured four straight seasons in which they won no more than seven games. The program then experienced a terrific resurgence over the last two seasons, going a combined 39-19.

“I feel like I hit the whole spectrum of coaching,” Holden said with a laugh. “My first couple years were pretty good but then we had some lean years. That one year we only won two games. But I tried to take a lot of positives out of it. I changed the way we did practices and we experimented with some different offenses and defenses. When we got to that low point I felt like we just needed to dig in and do whatever we can to get better.”

That certainly happened with the group of seniors that just completed their careers earlier this month. With a few of them seeing varsity time as freshmen and sophomores, they combined to win just nine games over those two seasons. Then, after an 18-10 finish in 2016-17, this year’s Lower team posted a 21-8 record and won three state playoff games to appear in its first South Jersey championship game in 30 years.

“I really enjoyed coaching this team and seeing those seniors improve over the last four years,” Holden said. “They struggled those first couple years but then they got 39 wins the last two years. Seeing the smiles on their faces and seeing them attain some things I think even some of them didn’t think was possible, that was the most rewarding feeling.”

Lower Cape May athletic director Erik Simonsen said the school will post for the coaching position in the coming weeks.

Holden began his high school coaching career in South Florida as the head coach at Pembroke Pines Charter in the Ft. Lauderdale area. He coached and taught at the school for six years before returning to this area to do the same at Lower Cape May.