Jazzy Duverglas poses with Drew Gallagher after the Beth Hartman Memeorial Three-Point Showdown at All Star Saturday. Elaine and Harry Hartman were on hand to congratulate them.

OCEAN CITY- Jazzy Duverglas of Cedar Creek made 12 of 15 three-point attempts on Saturday to win the Beth Hartman Memorial Three-Point Showdown at All Star Saturday.

Duverglas, who was also Most Valuable Player in the Wonderland Pier Girls Classic, completed her final day in her Pirates’ uniform by making her first seven shots in the three-point showdown to win the contest with Drew Gallagher of Holy Spirit, the boys champion. Gallagher made 8 of 15. 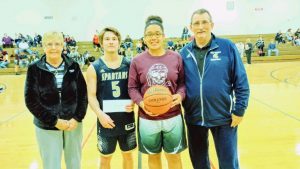 Jazzy Duverglas poses with Drew Gallagher after the Beth Hartman Memeorial Three-Point Showdown at All Star Saturday. Elaine and Harry Hartman were on hand to congratulate them.

Duverglas was just as hot in the girls three-point contest. She made 11 of 15 in the first round to advance into the finals with Francesca Geromini of Mainland, who made nine. Duverglas made another 10 in the final round to finish with 21 of 30. Germoni made 14 of 30.

This marked the third time in five years that a Cedar Creek player won the girls shootout. Maddie Tomasello won in 2015 and Mikila Stefanski in 2014.

The other contestants in the girls shootout were Kamryn Englert of Holy Spirit, Liana Fiore of Egg Harbor Township, Genesis Vazquez of Vineland and Kilie Wyers of Ocean City.

Gallagher is the third Holy Spirit player to win the boys three-point shootout. Matt Sommers won in 2015 and Kyle Dhyne, one of Gallagher’s coaches at Holy Spirit this year, won in 1998.

The other contestants in the boys contest included Divine Anderson of Pleasantville, Jaylen Busby of Oakcrest, Tom Jamison of Ocean City and Ramon Rodriguez of Atlantic City.

Beth Hartman made more than 150 three-pointers in her career at Holy Spirit High School. She returned to the Cape-Atlantic League as head coach at Egg Harbor Township before losing her life to cancer at age 29. The Beth Hartman Memorial Three-Point Shootouts not only reward the winners with trophies produced by Schoppy Inc. but each winner also receives a scholarship.

Elaine and Harry Hartman were on hand again to congratulate the winners and to help remember a young woman who was an important part of the Cape-Atlantic League. 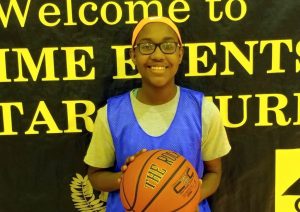 In addition to the three-point shooters, one local girl won the foul-shooting contest among middle school players. Xiomara Walker (above), an eighth grader at Bishop McHugh in Cape May Court House. She made 18 of 20 free throws, including all 10 in the first round, to win the contest. The only other Bishop McHugh player to win the All Star Saturday free throw shooting contest was future Wildwood Catholic star Jane O’Donnell in 2002.

FREE THROWS: box scores, rosters, photos and more will be available at http://www.primeevents.net/allstarsat2.html this week.