For the past four winters, Maggie Wallace and Ryann Styer have propelled the Ocean City High School girls swim team to new levels of success. A state championship, three South Jersey titles and dozens of school and meet records were left in their wake.

Here we ask these two great athletes a handful of the same questions to learn a little more about them. 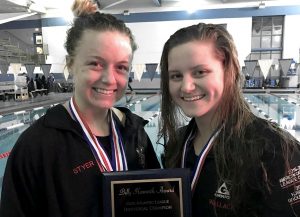 Who taught you how to swim?
Maggie: “Amanda Nunan’s mom and Patti Bernard taught me how to swim. My mom signed me up for the Ocean City club team and they taught me all the strokes. I was a big soccer player when I was young but I started to like swimming a lot better.”
Ryann: “I went to Ocean City C-Cerpants when I was six. My sister, Noel, had open-heart surgery and the doctor told my parents that swimming was the best sport for it so we all swam.”

When was your first race?
Ryann: “Around the same time. I did the Ocean City meets and then started going to bigger meets and things like Junior Olympics. It was just a lot of fun. All my friends were swimming and I just enjoyed doing it.”
Maggie: “My first race was a 25 breaststroke. I loved breaststroke back then but now – not so much. I don’t remember how I finished but my mom said I did a good job and the meet was fun.”

What was it like coming into the Ocean City High School swim program?
Maggie: “I had Coach Kate Merz for seventh and eighth grade English and I knew the team was very strong. I would help her put together lineups for meets. So, when I got into high school I was really excited. To be around those talented swimmers every day and swim with them was great.”
Ryann: “It was crazy. When I was a freshman I was really intimidated knowing there were 18 year olds I was going to swim against and I was only 14. But it was fun because a lot of my friends from C-Cerpants were still on the team – like Aly Chain, Amber Glenn – a lot of them. I wasn’t really in shape because I had stopped swimming after eighth grade. But I got back into it and learned a lot of new stuff. It was exciting.”

What are your greatest memories of high school swimming?
Maggie: “Definitely winning the team state championship my sophomore year was the biggest one. Also, being in the top three all four years in the 500 free at the Meet of Champions.”
Ryann: “Oh, my gosh, there are so many. All the South Jersey championships, the CAL championships and winning the state championship my sophomore year was unbelievable. We won states in the 200-free relay my freshman year. We were seeded something like fifth or sixth. It came out of nowhere – we were shocked. It was awesome. There are a lot of great memories.”

Who most inspires you?
Maggie: “I look at (five-time Olympic gold medalist) Katie Ledecky as an inspiration. She won gold in 2012 as a 15-year old. I really look up to her because she is just so fast. When I was 12 years old I was in a race with her in Maryland. She lapped me but it was the best lap of my life. I got her to sign my program book.”
Ryann: “Definitely my sister, Noel. We never swam together on the high school team – when I was a freshman she was a freshman in college. But she had all these records and was someone I look up to. It was always exciting to see where I was compared to her. I would go to her whenever I had problems or questions about swimming. She really helps me out.”

Ryann is headed to the University of South Carolina and Maggie to Indiana. Why?
Maggie: “I was deciding between three or four schools for a while but Indiana showed me that they wanted me as a distance swimmer and not just to be part of relays. I loved the campus, the coaches and the team when I got there.”
Ryann: “I just loved the entire team. From the moment I arrived at South Carolina the coaches were so nice to me and made me feel like I was already part of the team. The school gives you so many opportunities for swimming. There is a building just for athletes to study and a separate dining room. You get free tickets to football games and tutoring for free. Its just so nice there and they made me feel really comfortable and excited about the sprinting programs they have.”

Will the OCHS girls swim team continue its success?
Maggie: “The program is definitely in good hands. We have people like Andrea, Claudia, Alex – good swimmers that Ryann and I leave with a work ethic. And we also leave behind a fantastic coach in Ian Keyser. He really has helped Ryann and me with our swimming. So, Ocean City will continue to do well in swimming.”
Ryann: “I know they are going to push themselves. Maggie and I left behind a good attitude toward working hard. There are some good freshmen coming in next year and Claudia, Andrea – all of them – work very hard and should lead the team next season. I’m excited to watch them.”

Two girls who spent the last four years swimming for the Raiders now head on to new challenges. But the highly successful careers of Maggie Wallace and Ryann Styer leave behind goals and challenges that future swimmers will strive to equal for decades.