Nov. 22, 2017, Conte Forum, Chestnut Hill, Massachusetts: during the Eagles 83-79 victory over the Raiders in a non-conference matchup.

Jordan Robertson’s career with the Colgate University men’s basketball team was in position to finish with a flourish.

But the Raiders fell to Bucknell, 83-54, in the Patriot League championship game, sending the Bison to the NCAA Tournament and leaving Colgate wondering what could have been.

“It was real tough to handle,” said Robertson, a 6-4 senior guard and 2014 graduate of Wildwood Catholic High School. “Going into the game we were extremely confident because, even though we lost, we had played two competitive games against Bucknell early in the season. The way we game planned and prepared and the way we had played against them the other games and the way we were playing, we thought we’d play better and do a lot better than we did. So it was tough to handle but we still had a great season. Nineteen wins is still a lot to be proud of.”

Colgate’s season isn’t finished, however. The Raiders have been placed in the field of the College Basketball Invitational and will play at San Francisco in the first round on Wednesday. 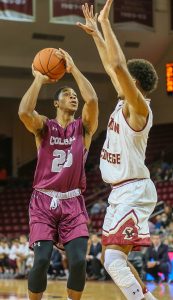 Robertson has been a major contributor for Colgate this season. He has started just one game but has seen action in all but one of them, often as the first player off the bench. He has averaged 5.4 points and 1.5 rebounds per game as a senior for a Colgate team that enters the CBI at 19-13.

Robertson scored eight points in the Patriot League title game, which was broadcast on national television on CBS Sports Network.

Although missing out on the NCAA Tournament was disappointing, Robertson said he take nothing but fond memories of his career with him, no matter what happens in the CBI Tournament. Colgate also reached the Patriot League Tournament semifinal round during his freshman season in 2015.

“It was everything I imagined it would be,” he said. “It was a lot of time and commitment but it all paid off and worked out great. I was part of two great teams here and I got the opportunity to play in front of huge crowds at big schools and we did well in our conference.

“I learned a lot. Our coaches really took care of us and we learned a lot about basketball. I’m a much better player now than I was when I came here here four years ago. It was a great experience.”

Robertson might have grown as a player during his time at Colgate but he was still a pretty good one during his days at Wildwood Catholic. He led the Crusaders to the Cape-Atlantic League playoff tournament championship as a senior in 2014, when he averaged 18.5 points and eight rebounds per game. No one associated with Wildwood Catholic’s program will forget Robertson’s performance in the CAL tournament semifinal against Holy Spirit, when his three-point basket with less than 20 seconds go gave the Crusaders the lead for good. He later sealed the victory with a vicious dunk following a steal just prior to the buzzer.

Robertson said he feels like those days at Wildwood Catholic happened much more recently than four years ago.

“Everything here went by so quick. It feel like yesterday that I was finishing up at Wildwood Catholic and getting ready to come to Colgate,” he said with a laugh. “You have so much going on academically and with basketball that the season just flies by, especially this season since it was my last one. But I had so much fun here.”

Robertson, who turns 22 later this month, has played in exactly 100 games for Colgate during his career entering the CBI Tournament.

Robertson is on track to graduate in May with a degree in sociology. He said he has begun to think about a transition from student athlete into working adult, but is also leaving open the possibility of continuing his basketball career professionally overseas.

“I definitely want to keep my options open about basketball in the future,” he said.

No matter what happens with his future, Robertson feels he’s a better person for his experience at Colgate.

“It was so fun that you don’t notice how fast the time goes by. But I really think my time here made me better as a person.”