RAIDER ROUNDUP: A trio of exciting wins during the week

On a day his family was honored, Tommy Bolle helped the Wildwood Catholic High School baseball team beat its closest rival for the first time in 10 tries.

Bolle, a sophomore, had two hits and four runs scored as the Crusaders broke a nine-game losing streak to Wildwood with an 18-9 victory under the lights Thursday evening at Maxwell Field. 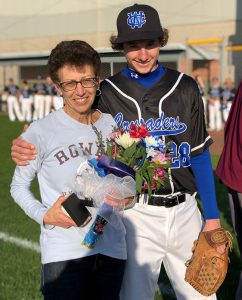 Wildwood Catholic sophomore Tommy Bolle with his mother, Vicki, prior to Thursday’s baseball game against Wildwood.

Three of Tommy’s older brothers, Steve, Matt and Billy, each played baseball and other sports at Wildwood. (Steve spent his first two high school years at Wildwood Catholic before transferring to Wildwood).

Tommy’s other siblings are his older brother, Jeff, and a younger sister, Ivy.

Steve, Matt and Billy each threw out a ceremonial first pitch prior to the game. Wildwood Catholic head coach Jim Norris Jr. said a few words and the family was greeted by the players and coaches from both teams.

Interestingly, Matt Bolle played in the contest the last time Wildwood Catholic had beaten Wildwood, on April 20, 2013. He walked twice as Wildwood’s leadoff hitter in a 5-1 Wildwood Catholic victory. Kevin Laffey went 2 for 3 with two RBI and Tyler Norris, the younger brother of the current Wildwood Catholic coach, tossed a three-hit complete game with eight strikeouts.

Wildwood won the next nine meetings between the two schools spread over five seasons until the Crusaders broke through on Thursday.