RAIDER ROUNDUP: A trio of exciting wins during the week

The last four days of Ocean City High School sports have been driven by a last inning rally and a pair of overtime goals.

On Wednesday in Medford, Girls Lacrosse (10-1) went into overtime against Shawnee, trying to avoid a second straight loss. The Renegades had tied the game with 14 seconds left in regulation but Ocean City won the subsequent draw and nearly scored the game winner. In overtime, Shawnee won the draw and sophomore goalie Abbey Fenton made a great save and was fouled. Junior Danielle Donoghue then got a shooting space call and lined up to take the shot but passed the ball. She then rolled around the crease, got a return pass from Shannon O’Reilly and scored to win the game.

On Thursday in Richland, Boys Lacrosse (10-2) got goals from sophomores Ted Grimley and Noam Levy-Smith in the final minutes and four great saves by junior Charlie Dahl to go into overtime with St. Augustine. After an exchange of shots and a penalty on each side during the extra time, Grimley picked off a St. Augustine pass and took off downfield. He advanced the ball to junior Christian Kuhn, who beat his defender and headed toward the goal. When he drew extra defense, he passed to senior Joe Lloyd on the other side of the goal and Lloyd buried it for the game-winner. It marked the first time a Cape-Atlantic League team had ever beaten St. Augustine in lacrosse.

As exciting as that rally was there was more excitement in the bottom of the seventh. Cherokee scored two unearned runs and had the bases loaded, trailing 8-7. But Campbell induced a ground ball to short and Lashley threw to first for the final out. Frank Piernikowski – who joined Campbell and Tom Breazele in strong work out of the bullpen – got the win and Campbell the save. Nunan started the game but his control was not as sharp as usual. He struck out nine in three and two-third innings but walked seven.

The win lifted the team’s record to 10-1 and stretched the win streak to eight straight. No other OCHS baseball team has ever been 10-1. The best previous start to a season was 9-1 by Dixie Howell’s 1963 team.

Andrew Bristol will send his team out four times this week – including home games with Millville (Monday), Middle Township (Tuesday) and Lower Cape May (Thursday). On Saturday the Raiders will play a night game with Atlantic City on the Ventnor Recreation field. The game between Ocean City and St. Augustine Prep, rained out on Wednesday, will be played on May 22. 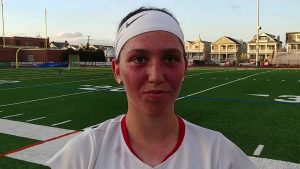 In the overtime win at Shawnee by Alyssa Morrison’s girls lacrosse team, Emily DiMarino scored five times and had two assists. O’Reilly scored three times. The overtime goal was Donoghue’s only goal but she added five assists. The Raiders, who had lost to No. 1 ranked Moorestown two days earlier, went on to defeat Mainland, 13-4, with Donoghue (above) scoring five times to take control of the Cape-Atlantic League. Girls Lacrosse hosts Our Lady of Mercy on Monday, goes to Atlantic City on Friday and hosts West Deptford on Saturday morning.

Joe LaTorre’s boys lacrosse team added a 14-2 win over Cherry Hill East on Saturday with Levy-Smith and Trent Laveson each scoring three goals. Kuhn, Anthony Inserra, Chris Raniszewski and Jake Schneider each scored twice. The Raiders go to Delaware on Monday to play Cape Henlopen, go to Vineland on Tuesday, host Atlantic City on Friday and get on the bus at 7:30 Saturday morning to travel to Clark in Union County to play A,J. Johnson.

Golf (9-1) had another good week in a golf season filled with good weeks. The Raiders won the Ralph Carson Memorial Cape May County Tournament championship with senior Matt Blaker winning the individual title by shooting 82 at Shore Gate Golf Club. And Blaker wasn’t the only Ocean City golfer to perform well under difficult conditions at the tournament. Jack Sullivan shot 85 for second place and defending champion Isaac Royster carded an 87 for third place. Craig Nordberg also grabbed the final place in the top 10, finishing with a 93. 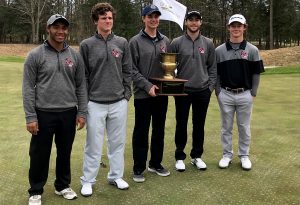 The Raiders defeated Mainland, 160-165, with Sullivan getting a 38 and Royster a 39 at Linwood Country Club. And they buried Vineland, 157-247, with Sullivan getting a 36. This week Ed Ritti and Bryan Chojnacki will take their team out twice against Egg Harbor Township – Wednesday at Green Tree and Friday at Greate Bay. They also take on Bridgeton at Wild Oaks and will play in the Arena-Rifkin Tournament on Thursday, featuring most of South Jersey’s top teams.

Track performed well at the Penn Relays, setting some personal bests. The boys 4×100 (Cian O’Donoghue, Matt Zelinski, Lou Conte, Kevin King) and 4×400 (Zelinski, Liam Bergman, Jesse Schmeizer, Sean Zellers) relay teams both recorded times that were faster than any by OCHS teams at the Penn Relays for more than a decade. There are dual meets on Tuesday with the girls hosting Millville at Carey Stadium. And both teams compete in open meets later in the week.

Softball (2-6) lost its fifth straight, 12-1, to a strong Millville team. Catherine Faust and Savanna Holt each had two hits for John Bruno’s team, which will complete the Parkway South portion of its seven-game road trip this week with games at Wildwood Catholic (Monday), Middle Township (Tuesday) and Lower Cape May (Thursday). Ocean City will host Highland on Friday, its first game at Dick Grimes Field since April 19.