Orlando Magic coach Frank Vogel, a graduate of Wildwood High School, poses with brothers (from left) Taylor, Connor and Zander Bezaire following a Magic game against the Philadelphia 76ers in November. Vogel won his 300th career game as an NBA coach this week. 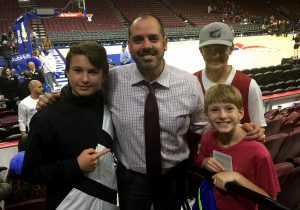 Frank Vogel, pictured with with brothers (from left) Taylor, Connor and Zander Bezaire following a Magic game against the Philadelphia 76ers in November, was relieved of his coaching duties by the Magic Thursday morning, according to media reports. Vogel is a 1991 graduate of Wildwood High School.

Wildwood Crest native and Wildwood High School graduate Frank Vogel has been fired as head coach of the Orlando Magic, according to a report by ESPN.

Vogel, a 1991 graduate of Wildwood High School who had worked his way up the basketball coaching ladder after starting as a student manager at the University of Kentucky, went 54-110 in his two seasons as Magic coach.

“We would like to thank Frank for his contributions to the Orlando Magic,” Magic president Jeff Weltman said in a statement that appeared in a story on ESPN.com. “We appreciate the sacrifices he made as head coach and certainly wish him and his family well going forward.”

According to reports, Vogel had at least one year remaining on his contract.

Despite his firing, Vogel is still regarded as one of the NBA’s most underrated and respected coaches. Prior to his stint in Orlando, Vogel coached the Indiana Pacers for six seasons, twice leading the team to the NBA Conference Finals.

Vogel became video coordinator under Rick Pitino at Kentucky and followed Pitino to the NBA when Ptinio was named head coach of the Boston Celtics in 1997. He was first video coordinator and later assistant coach with the Celtics, before becoming an assistant with the 76ers under Jim O’Brien for the 2004-05 season. He then became assistant under O’Brien again in Indiana two years later and was promoted to head coach in the middle of the 2010-11 season when O’Brien was fired in midseason. Vogel parted ways with the organization when his contract expired following the 2015-16 season. He was then quickly hired by the Magic.

The Magic finished the 2017-18 season at 25-57, the second-worst record in the NBA Eastern Conference. Many NBA observers, however, have already taken to social media to blame the lack of a talented roster, rather than Vogel’s performance as coach, as the major contributor to the Magic’s woes.