One of Cape May County’s top high school boys basketball players has made his college choice.

Patrick Holden, a four-year starter at Lower Cape May Regional High School, has decided to continue his athletic and academic career at Division III Widener University.

“I’m super excited,” Holden said. “It’s always been a goal of mine to play college basketball, of course, but now that it’s actually here and I’m going to be able to do it, it’s crazy. When the fall hits I’ll be ready to go. I’m ready for it.”

Holden, a 5-8 guard, is one of the most prolific scorers in Cape May County high school boys basketball history, finishing with 2,103 career points. He averaged 22.7 points as a senior, leading Lower Cape May to a 21-8 record and a berth in the South Jersey Group II title game. 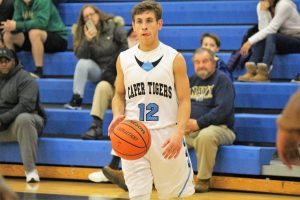 But beyond the scoring, Holden was also considered as of South Jersey’s top point guards over the past few seasons.

Widener is coached by Ocean City native and St. Augustine Prep graduate Chris Carideo. The Pride went 18-10 overall, 8-8 in the Mid Atlantic Conference Commonwealth Division, and won the ECAC Division III title by defeating Neumann University in the title game this past season.

“It was a very difficult choice,” Holden said. “Both coaching staffs were very equal in terms of how great they were to me during the whole process. That made the decision difficult for me. But what did it for me was the distance. I wanted to experience something a little further away from home. I just wanted to get away a little bit and that was the stepping stone to what helped make the decision for me.”

Holden, who said he plans to major in business, added that he likes Widener’s style of play.

“I think their style is very similar to the style I like to play,” Holden said. “A little up-tempo, run the floor, a lot of team play, share the basketball and find the open guy. I really like the way they play and I can really see myself in that environment with those guys.”

Holden’s older sister, Lauren, also plays college basketball, having recently completed her junior season at Division I Fordham. He and his sister are the respective all-time leading scorers boys and girls basketball at Lower Cape May. Lauren, a 2015 graduate of Lower, scored 2,476 high school points.