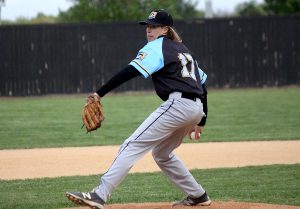 CAPE MAY COURT HOUSE — Seth Antonicello transferred into Lower Cape May Regional High School for the current scholastic year, so he didn’t really know much about the school’s athletic rivalry with Middle Township.

He got a nice taste of it Wednesday evening.

With a large crowd on hand for a game played under the lights, Antonicello allowed four hits and two runs over 6 ⅓ innings to pace Lower Cape May to a 7-2 victory.

“He did great,” Lower coach Ryan Slaney said of Antonicello. “His pitch location wasn’t excellent and that caused his (pitch) count to get high but I thought he did well. He made adjustments when he needed to and he threw strikes.”

Lower held a 2-0 lead after three innings, with Middle errors playing a hand in both runs. The Caper Tigers then upped their lead to 5-0 when Brennan Ray belted a three-run double to right center in the fourth.

Zach Wyatt’s two-run single in the fifth gave Middle its only runs.

Lower (4-13) scored two more runs in the top of the seventh to set the final score.

Antonicello was lifted after getting the first out of the seventh. Kenny Haungs got the final two outs. 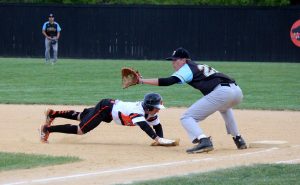 Antonicello, Liam Mulligan and Justin Nicholas each had RBI hits for Lower. Nicholas and Ben Morris each had two hits.

Wyatt struck out eight in a losing effort for Middle (6-10).

Middle beat Lower, 11-1, in the first meeting between the two teams on April 17.

“This was nice redemption for us,” Slaney said. “Anytime you play a local rival you want to be on top, no matter how you’re doing. We had a rough start to the season but we’re playing better here as we get closer to the end of the season and hopefully we can ride that the rest of the way.”