Kelsey Lewis (kneeling, center) is surrounded by her supportive teammates on the Lower Cape May Regional High School girls lacrosse team. Lewis, a former player on the team, has been diagnosed with a blood disorder and is now serving as the team’s manager.

ERMA — At the end of a recent practice on a warm day, the players and coaches on the Lower Cape May Regional High School girls lacrosse team engaged in a fun water balloon fight.

Rather than taking part, Kelsey Lewis made sure to keep a good distance away from the flying projectiles filled with water. Instead, she smiled at her teammates’ enjoyment of the experience because it was the only manner in which she could participate.

Lewis, a junior, was a playing member of the team last year, had also been a dancer for 13 years and a cheerleader for Lower’s football team. But she was forced to forgo those activities after being diagnosed last November with Immune Thrombocytopenic Purpura (ITP), a blood disorder that leads to abnormally low levels of platelets, the blood cells that control bleeding.

“Last October I woke up one morning with bruises on my legs and arms and I didn’t know where they came from, so I went to the doctor for lots of tests,” Lewis said. “That’s when I got diagnosed.”

The disorder is preventing Lewis from participating in any strenuous activities, particularly those in which there is any chance for physical contact.

“It’s not crazy rare, but not a lot of people have it,” Lewis explained. “There’s no real cure for it but there are things you can try to get it under control and make it better. The doctors just haven’t found anything that works for me yet. 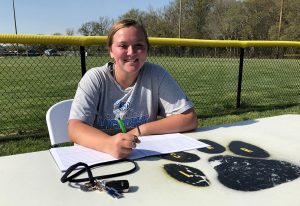 Lower Cape May junior Kelsey Lewis can no longer play lacrosse but has taken on a valuable role with the program as team manager.

Since being diagnosed, Lewis regularly travels to Cooper Hospital in Camden for visits with doctors and treatments. But she’s still part of the lacrosse team, transitioning to a manager’s role this spring.

For Lewis, being around the team is some of the best medicine she can get.

“It was definitely important to me to be part of the team,” she said. “I’m here to help with whatever. I still socialize with all of them. I’m happy to be still involved. They’re definitely my biggest supporters. It’s nice to still feel part of the team.”

The players certainly appreciate having her around.

“It’s so sad this happened to her,” senior captain Katie Knox said. “Kelsey is one of the most kind, caring girls I’ve ever met in my life. She’s such a big part of our lacrosse family. Her not being on field takes a toll on her and the rest of our family here because she’s such a great girl. We need her. She’s so great for us. It’s really a shame she can’t dance, either, and have a normal life like she should have.”

After being diagnosed with ITP, Lewis said she initially didn’t think how much her life might change.

“At first I didn’t believe it but after having to sit out and watch that’s when it sunk in,” she said. “It’s frustrating that I can’t do anything right now and there’s nothing that can really fix this. So it’s hard.”

Lewis still traveled to Disney World with her dance group out of the Joanne Reagan Dance Studios recently but wasn’t able to partake in any of the dancing. Her condition also prohibited her from going on the amusement rides.

“The hardest thing to do is just sit there,” she said. “After I first got diagnosed, I went to dance and just watched. I couldn’t just stay away from it. I went to Disney and watched from backstage.”

“The hardest thing is not going there anymore.”

Remaining part of the program at Lower Cape May has been therapeutic for Lewis.

“It’s still hard to take. But coming here every day and being around the lacrosse team is the best choice I made,” she said. “This is the best supportive group I could’ve been around. They really know what being a team means.”

Her teammates recently dedicated a game to Lewis, a tough one-goal loss to Millville. The players had T-shirts made in her honor and wore them ahead of the game. The shirts featured a ribbon on the front and Lewis’s name on the back.

“Kelsey is the nicest kid and she’ll do anything for anybody on the team,” Lower coach JoAnn McLaughlin said. “After we dedicated that game to her, she came in with hand-written thank-you cards for every one of the girls on the team.”

Lewis, 17, lives in Erma with her family, which includes five siblings ranging in age from 19 to 7. She is the second oldest.

Lewis tries to stay positive through her ordeal.

“Having this helps me realize how lucky I was before, that I was able to play sports and dance,” she said. “But it’s hard.”

Lewis said the condition itself is not life-threatening but physical contact, particularly anything jarring or violent, is cause for concern.

“There are a lot of risk factors for me,” she said. “Like something like a car accident, that would be dangerous for me. I have to be careful with everything I do.

“There’s no known cure but there are multiple things the doctors can try to help me. Nothing’s worked for me yet. But it could go into remission. But it could also come back at any time. They’re hoping to find one thing that works for me so they’ll know for when it comes back.

“It’s more mentally draining than anything.”

Lewis held a fundraising effort through Facebook to raise money and shed light on her condition. The campaign, which ended May 1, raised nearly $1,600. Lewis said she donated all of the money to Cooper Hospital.

Through the ordeal, Lewis has stayed committed to the team. McLaughlin said Lewis even brought Munchkins from Dunkin’ Donuts for all of the players for a recent Saturday game against Absegami after receiving treatment in the morning prior to the contest.

“She’s been really supportive for all of us, especially me because I had some medical problems, too” said Gab Masterson, another senior captain. “We weren’t that close before but she reached out to me to make sure I was OK and we really became closer. She’s so supportive of all the girls on the team. She could have quit the team after this happened but she still wants to be here every day to support us every day in any way she can and that means a lot to us.”

Added Abby Boyle, another senior captain: “We just want to support her with anything she struggles with and always be there to talk to her.”

The coaches and players quickly stress that Lewis’s ordeal has galvanized the team.

“I feel like we’ve always been a close team but with everything that’s gone on with Kelsey, that has really brought us together even closer,” Masterson said.

“The girls realize you can’t take any day for granted,” the coach said. “They’ve been playing for her and other people that can’t play,” a nod also to standout attacker Carina Raymond, who has missed the entire season with a knee injury suffered during basketball season.

“I think having Kelsey around, the girls try to keep her spirits up,” McLaughlin added.

For the players, Lewis also serves as a reminder about perspective.

“It makes you make sure you don’t take things for granted,” Knox said. “She was doing dancing and sports all her life and then randomly for this to come on in her junior year isn’t fair to her at all. She still has her entire life ahead of her.”

And an entire team willing to support her through it all.

The players on the Lower Cape May Regional girls lacrosse team recently dedicated a game to former player and current team manager Kelsey Lewis. They wore T-shirts to show their support.