When your spring sports teams have a combined record of 77-21 it is expected that there will be some significant games. But this week the Ocean City High School teams face an unusually challenging regular season week.

It all starts today (Monday) when Baseball (13-1) travels to Egg Harbor Township to play the Eagles. Though it’s a non-conference game, EHT has some solid hitters and OCHS has a superb pitching staff to make it an interesting match-up.

Tomorrow, Golf (12-2) joins the rest of the Cape-Atlantic League for the league tournament on McCullough’s Emerald Green Links in Egg Harbor Township.

On Thursday, the golfers are back in action at Greate Bay trying to complete a sweep of Mainland. And Boys Tennis (11-3) will travel to Cape May Court House to take on National Conference leader Middle Township.

On Saturday, the baseball team plays a tough Bishop Eustace Prep at Maple Shade High School (1pm) in the opening round of the 45th Annual Joe Hartmann Diamond Classic. This will be Ocean City’s fifth appearance in the mid-season tournament that brings together 16 of South Jersey’s most impressive teams. The Raiders last played in 2015 and have a 1-4 record all-time in the classic. The only Ocean City win came in 1984 when Bud Rinck’s team defeated Schalick, 10-4. (Andrew Bristol was in the 5th grade in 1984.) The winner of the OCHS-Eustace game will play either West Deptford or Riverside on May 19 at Deptford. St. Augustine and Holy Spirit were also selected to play in the Diamond Classic.

And on Sunday, Crew will compete in the Atlantic County Championships on Lake Lenape.

But Friday – Friday might be the most interesting day for Ocean City sports teams in a long time.

The golf team will travel west and take on St. Augustine Prep at Buena Vista Country Club. According to available records, the Raiders have never beaten The Prep on the golf course. They lost earlier this season, 147-161.

Boys Lacrosse (13-3) will be in Linwood Friday taking on Mainland in what amounts to a Cape-Atlantic League championship game. Both teams are undefeated in CAL play and you can find out about their depth of talent by checking out the CAL Boys Lacrosse Stat Leaders – http://www.primeevents.net/calspring.html.

Softball (4-8) is also playing Mainland, though no championships will be at stake. The game will be played on the Birch Grove Park field in Northfield to Strike Out Cancer and will raise money for the fight against the disease.

Those games will all be played off the island but there will be lots more happening Friday in Ocean City.

The Cape May County track teams – both boys and girls – will be on hand at Carey Stadium for the County Championship Meet. The OCHS girls have won this meet all 38 years it has been held. And the Raiders have won the boys championship all 10 years under Coach Matt Purdue and 38 times in the meet’s 46-year history.

Then, to top off this remarkable day, there will be a baseball game under the lights (7pm) at 5th and Bay between Ocean City and Mainland that could decide the National Conference championship. When the two teams played in Linwood, the Raiders won it, 1-0, with Dan Nunan and Brandon Lashley combining for a shutout and Nick Atohi pitching just as well for the Mustangs. If OCHS wins this game Friday and the game at Absegami on Wednesday it will win its 15th CAL championship and second in three seasons.

This past week was pretty good.

Lashley pitched a no-hitter and struck out 15 against Middle Township. Andrew Bristol’s Raiders then came within a few outs of back-to-back no-hitters when A.J. Campbell gave up a single hit in the sixth inning and then Syd Unsworth struck out the side in the seventh for a win over Lower Cape May.

The OCHS players lined up with players from the Ocean City Youth Athletic Association before the game with Lower Cape May.

Boys lacrosse bounced back from a loss in Delaware to win three straight by a total of 47-10. Joe LaTorre’s team has now won 27 straight against CAL teams.

Girls Lacrosse (13-1), which needs just one win this week to clinch its seventh Cape-Atlantic League title and second in a row, beat Atlantic City and Our Lady of Mercy by a combined 34-4 and then used six goals by Emily DiMarino to defeat West Deptford, 14-11. Alyssa Morrison’s Raiders enter this week with a 21-game win streak against CAL teams. 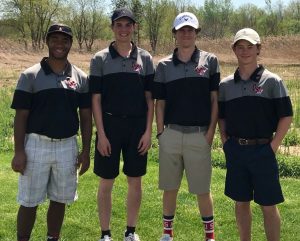 The golf team finished fifth in the prestigious Arena-Rifkin Tournament with Jack Sullivan (at right in photo, above) recording an impressive 74 at Riverwinds Golf & Tennis Club in West Deptford.

And the track teams wrapped up their dual meet seasons with victories. Junior Sophia Gresham (below, with Coach Tim Cook) broke a 24-year old school record when she long jumped 17 feet, 8.25 inches to better the old OCHS mark set by Kellie Adams by two inches. Adams, who still holds the record for the 100 hurdles, was chosen OCHS Track Athlete of the 1990s. Grisham is also part of the 4×100 relay team that holds the school record. Check out all the OCHS girls track records here – http://www.oceancitysports.com/OCHSRecordsGTr.html. 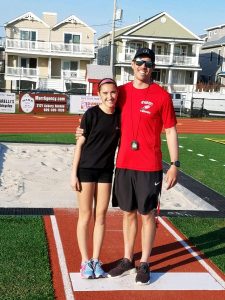 The NJSIAA tournaments will start soon and take up the rest of May. But this week has a championship feel to it – highlighted by a very busy Friday.