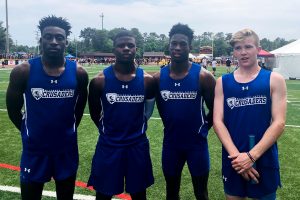 Rakim Coyle, Charles Fields and Caleb Fields entered Wildwood Catholic High School known for success in sports played in the fall and winter. Coyle was the soccer standout and the Fields brothers had shown great promise on the basketball court.

All three certainly played to their potential, becoming all-stars in their respective sports.

But they also have gone on to make an indelible impression on the school’s spring track program.

“I didn’t expect any of this, to be honest,” Coyle said. “It’s different to do it for track. Basketball is the most popular sport in our school but when you come to our gym for games the track and cross country and swimming records are all up on the walls. Even though people will be coming for basketball games, they’ll be able to look over and see our names on the record board and that’s really cool.”

Charles Fields, one of the most accomplished high school track athletes in Cape May County history, capped his career with a flourish by winning the 100- and 200-meter races individually and teaming with the Fields brothers and Aiden Saul to take first in the 4×100-meter relay.

Charles Fields will leave Wildwood Catholic as a seven-time state champion. He won the 100, 200 and long jump as a junior and was the long jump champ as a sophomore.

Charles Fields won the 100 in 10.82 seconds, taking first by nearly a half second. He claimed first without a challenge in the 200, posting a time of 21.76 seconds that was more than a second faster than his closest competitor.

He said he took more pride, however, in the relay team’s victory. Wildwood Catholic entered the final leg in second place by Charles Fields ran down the leader to give the Crusader quartet the win in 43.66 seconds.

“That was more of the goal for me, to give (his relay teammates) a state championship and give it to us as a team,” Charles Fields said. “I felt really happy coming back and winning for them.”

Coyle won the long jump with a leap of 22 feet, 8 ¼ inches, to beat second-place Caleb Fields by six inches.

“When I found out I won, I got butterflies,” Coyle said. “Becoming a state champion is a pretty big deal. I’m glad I did it for the school and it’s great to know I’ll be remembered as one of the more successful sports people in our school history.

“It feels great. I worked for it. There’s a lot of stress off my shoulders. I feel accomplished.”

Coyle also placed second in the triple jump. His distance of 43-6 ½ set a new school record.

Wildwood Catholic also received some points at the meet from Erick Feria, who placed fifth in the 800 meters.

The Crusaders finished third out of 22 teams in team scoring at the meet. This, despite having no practice facility of their own — they often work out at Wildwood High’s track facility at Maxwell Field — and competing exclusively on the road for all meets.

“It’s big for this program,” Charles Fields said. “This little Wildwood Catholic track team, we all kind of help put us on the map. It’s big for us.”

“We just worked hard and believed in each other. And we have to thank Wildwood for letting us use their track. I’m not sure what we’d do without that.”

All four athletes will compete in the Meet of Champions this weekend.

PHOTO FINISHES: Caleb Fields also placed fifth in the 100 and sixth in the 200. Chris Johnson also competed in the boys meet for Wildwood Catholic and placed 12th in the 1,600 and 14th in the 3,200. … Coyle is currently set to play soccer at Division III Penn State Abington but is also now considering other schools that have shown interest in him as a track athlete. Charles Fields will compete in track at Division II Georgian Court University next year, with the hope that a strong academic and athletic year will allow him to eventually transfer to a Division I school. Caleb Fields has accepted a basketball scholarship to Division I Bowling Green and Saul has enrolled at St. Joseph’s University for the fall. … In the girls meet, Wildwood Catholic’s Julia Sorensen placed fifth in the 3,200 and sixth in the 1,600 and Joelle Osborne was ninth in the 400 meters. And Osborne, Erin Connelly, Aliya Gray-Rivera and Emily Holzer teamed for a ninth-place finish in the 4×800 relay.