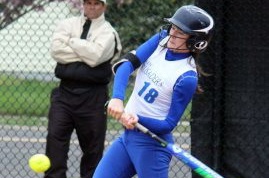 As might be expected, the power bats of South Jersey champion Wildwood Catholic dominated the hitting statistics of Cape-Atlantic League softball. And very few of the girls on the team were seniors.

Emily Cimino led the CAL in hitting with a .676 average and was also the league leader in home runs and RBIs. Anna Mae Peterson, Mercedes Rivera and Brianna Bailey were other Crusaders listed among the leaders who will be back in the lineup next year.

There were nine CAL players who hit .500 or better this spring.

Hagerty also had the lowest earned run average (1.47) of CAL pitchers. Vineland’s Nicole Ortega led the league in wins and Wheeler in won-lost percentage. Jessica Ingram of Mainland allowed the fewest hits per seven innings and had the most strikeouts. Hagerty allowed the fewest walks.

Check out all the softball leaders in every category at http://www.primeevents.net/calspring.html.