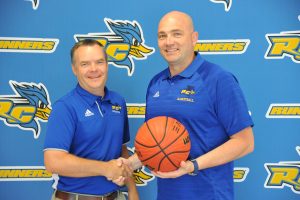 Will Wareham is moving up in the college coaching ranks.

Wareham, a 1996 graduate of Lower Cape May Regional High School, has been named head men’s basketball coach at Rowan College at Gloucester County (formerly Gloucester County College), which boasts one of the top Division III junior college athletic programs in the country.

Wareham goes to RCGC after a three-year head coaching stint at Cumberland County College, where last season he led the Dukes to a 23-7 record and a berth in the Region XIX title game. He went 48-37 overall during his three seasons there.

“Cumberland was a great opportunity for me to get head coaching experience at the college level and the athletic director there (Keith Gorman) couldn’t have been any better for me,” Wareham said. “But this opportunity at Rowan-Gloucester was too good to pass up. There’s a great winning tradition there with their entire athletic program. It’s one of the top non-scholarship junior college athletic programs in the country. I’m really fortunate to get the chance to go there and try to build and grow on it.”

Unlike many other junior college athletic programs in the region, RCGC, through its relationship with Rowan University, can offer near-campus housing to its students.

“Geographically this gives me more of an opportunity to recruit more kids and to have that partnership with Rowan and potentially house the kids gives us a distinct advantage over any other school in our region,” Wareham said.

Prior to coaching at Cumberland, Wareham served as an assistant coach for five seasons at Gwynedd-Mercy University under head coach John Baron, a North Wildwood summer resident.

Wareham’s first foray into coaching came as an assistant coach at the Cape May County Technical High School under Bob Ridgway.

Wareham, who now resides in Vineland with his family, is a regional recruiting supervisor for the United States Army National Guard. A 21-year member of the National Guard, Wareham served in Iraq in 2003-04. He played varsity basketball at Lower Cape May for two seasons and is a graduate of Post University (Conn.).

“Will is going to be a great addition to our program,” said Brian Rowan, executive director of RCGC athletics. “His enthusiasm and track record of success at this level are excellent. We want to compete for regional and national championships every year in every sport and this hire positions us well to do that in men’s basketball.”

Wareham is also the founder of the New Jersey Soldiers AAU basketball organization and coaches various Soldier teams during the spring and summer AAU season.

Al Genz, a former standout athlete at Ocean City High School who served as an assistant coach under Wareham at Cumberland County College, is expected to join Wareham’s staff at RCGC.