Maggie Wallace has been part of four of the greatest swim seasons in Ocean City High School history.

The Raiders won three South Jersey team championships and reached the state final twice, winning in 2016. In dual meet competition, Ocean City was 42-6 with Wallace in the pool.

“Definitely winning the team state championship my sophomore year was my biggest memory,” Wallace said. “Also, being in the top three all four years in the 500 free at the Meet of Champions was pretty special.”

Amanda Nunan, now at the University of Tennessee, was a big part of Wallace’s first three years. But this season was Maggie’s season to lead.

During that state championship season her sophomore year, Wallace finished second to Nunan in both the 200 free and 500 free at the Meet of Champions. In 2017, Wallace was just .09 seconds behind Nunan in the 500 free and, while she finished fourth in the 200 free, she was still less than a second behind.

She was selected New Jersey Girls Swimmer of the Year in 2017-18 by NJ.com.

And now Coast Sports Today recognizes her as the 2017-18 Cape May County Female Athlete of the Year.

“What Maggie has accomplished for the Ocean City High School swimming program over the last four years cannot be overstated,” said Ian Keyser, the OCHS girls swim coach. “She has been essential in bringing a new level of success and expectation to this team. Maggie is one of the most accomplished swimmers in program history. More importantly she was one of the key leaders in helping establish a successful culture for our team. Having her as a senior captain during my first year with the program was vital to our success. The underclassmen were able to see the work and determination it will take to keep our team at this level.”

Wallace will take her swimming skills to Indiana University where she will compete in the Big 10.

“I was deciding between three or four schools for a while,” she said, “but Indiana showed me that they wanted me as a distance swimmer and not just to be part of relays. I loved the campus, the coaches and the team when I got there.”

Since graduating, Wallace has used her skills to help the Ocean City Beach Patrol to a number of championships. 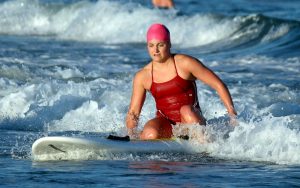 “Our success going forward,” said Keyser, “can be attributed to what Maggie did during her time with the team as she leaves us in a great position for the future. She leaves our team as one of the most influential members and key figures in our program’s history.”

Other finalists for Cape May County Female Athlete of the Year (listed alphabetically) are:

Emily Cimino, junior, Wildwood Catholic
One of the top softball players in the state, she batted .676 with 13 doubles, 13 home runs, 45 RBI and 40 runs scored for two-time South Jersey champion Crusaders despite playing much of season with painful hip injury. On pace to finish career with more than 175 hits. Also went 10-3 on the mound with 97 strikeouts in 87 innings pitched … has committed to play softball at D1 Lehigh University.

Danielle Donoghue, junior, Ocean City
Was an all star on the Raiders South Jersey basketball champions, leading the team in scoring, assists and steals while finishing second in rebounds. OCHS has won the South Jersey title all three of her years on the team … a three-time all star in lacrosse, she led the Raiders to a Cape-Atlantic League championship, was one of the top players in the state in controlling the draw and has scored more than 100 career goals … has committed to play lacrosse at D1 Mount St. Mary’s.

Maddie McCracken, junior, Wildwood
Finished second in Cape May County in goals with 18 and tied for first in the county in assists with nine in soccer … averaged 23.7 points, 9.7 rebounds and 4.5 assists and led girls basketball team to 20 wins and share of Tri-Co Classic title. Has 1,359 career points … one of county’s top distance runners in spring track.