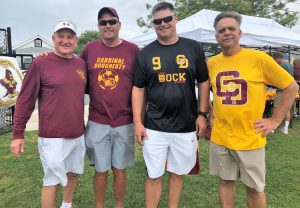 NORTH WILDWOOD – Nearly 200 people stood in the pouring rain Saturday at Bill Henfey Park to watch a soccer game played by a bunch of adults, many of whom weren’t necessarily in the best shape to perform.

“CD” stands for Cardinal Dougherty, as in Cardinal Dougherty High School. Located in the Olney section of Philadelphia, CD, or just “Dougherty” as many refer to the school, was once the largest Catholic high school in the country. In the mid 1960s, the school’s enrollment was believed to have climbed to as high as more than 7,000 students.

But like many urban Catholic high schools, the school experienced a massive decline in attendance, particularly after the early 1990s. Then, with less than 800 students in what became a cavernous building too big for that kind of enrollment, Dougherty suddenly shut its doors in 2010.

But, as Saturday’s soccer game and ensuing annual “Soar at the Shore” reunion at Keenan’s Irish Pub in the Anglesea bar district have proven, the spirit of the school’s community is certainly alive and well, as hundreds of Dougherty graduates descend on North Wildwood for the weekend each year.

The brainchild of Steve Schmidt, the annual CD Alumni Soccer Game at was first played in North Wildwood in 2015. At first, the idea was to try to keep the alumni of the school, particularly those who had played soccer there, engaged with one another. But the annual game has morphed into a fund-raising effort for many charitable causes in the Philadelphia area, particularly those organizations or individuals with ties to Cardinal Dougherty.

“The first year I was $1,500 in debt,” said Schmidt, a 1985 Dougherty graduate and former soccer player there. “We had to buy insurance, had to rent the field. … But then we had 35 people show up to play and about 150 people show up to watch. All we were able to do was give a local soccer club $300 that year. But thought we might’ve been on to something.”

Schmidt and the rest of the organizing committee have been able to procure numerous sponsorships for the game over the past few years. The players pay to play, but Schmidt said the individual entry fees actually fall $1 short of the cost. The sponsorships cover the rest, as well as give the alumni organization the ability to dole out charitable donations. Many of the sponsors have strong ties to Cardinal Dougherty.

“Now we’re way in the black and we’re able to give to a lot of people,” Schmidt said proudly but humbly. “Overall we’ve given $22,000 to a lot of different charities.” 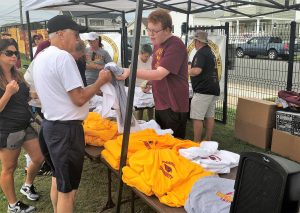 The CD Soccer Alumni Association awards four scholarships each year, given to college-bound students who are the children or grandchildren of Cardinal Dougherty graduates. They’ve also donated to local soccer organizations, many of which have ties to Cardinal Dougherty, and have given money to the soccer programs of other Catholic high schools in the Philadelphia area. This year, they have also made a donation locally to the soccer program at Wildwood Catholic High School.

Support to individuals in need has also been a staple of the organization.

“Anytime we find out a CD person is in need, we try to donate to them if we can,” Schmidt said. “One time a Dougherty graduate’s house burned down in a fire a couple days after Christmas. We replaced all the kids’ toys.

“We’re well in the black with our funds now, so that lets us hold on to the money we raise and then give it out as someone shows a need,” Schmidt said.

Dougherty had always held an alumni soccer game when the school was open.

“We always had a game on a Saturday at the school during the season,” said Larry Teal, a 1994 graduate of Dougherty who served as the school’s final head boys soccer coach. “Then when we closed in 2010, it went on hiatus until 2015.”

As part of the festivities, the CD Soccer Alumni Association inducts former players and contributors into its Hall of Fame. Cardinal Dougherty merchandise is also sold and banners of the event’s sponsors are hung on the fences around the field. And a disc jockey plays music while using a microphone to bust the chops of many of the players with “introductions” as they arrive at the field.

“What this has done for us, metaphorically, is allowed our alumni association to grow and progress even though the doors of the school have closed,” Teal said. “It’s another way to bring the CD community together and keep us going. A lot of us have said this has allowed us to meet Dougherty alumni we otherwise never would have known.”

Ed Courduff, a 1979 graduate, has participated in every alumni game except the first.

“When we come to this, we get to see all the people we haven’t seen in a long time,” Courduff said. “There’s no way to keep in contact with all the people so it’s great that we can all come together here.

“And it’s great to be able to help people that need help. It seems every year we find out that someone in our community is struggling in some way and it’s nice that we can step in and help.”

The organization of the Jersey Shore alumni game has become more entailed each year as interest and sponsorship have increased. Schmidt and the committee are more than happy for the extra work.

“We’re pleasantly surprised at how big this has become,” Schmidt said. “Soccer people are a different breed. They always have been. You ask soccer people to help you and they always come through.

“After we did it the first year and people found out we were doing this, everyone wanted to get involved. It’s amazing that a couple hundred people come out here just to watch a bunch of old guys play soccer. But Dougherty people are everywhere.” 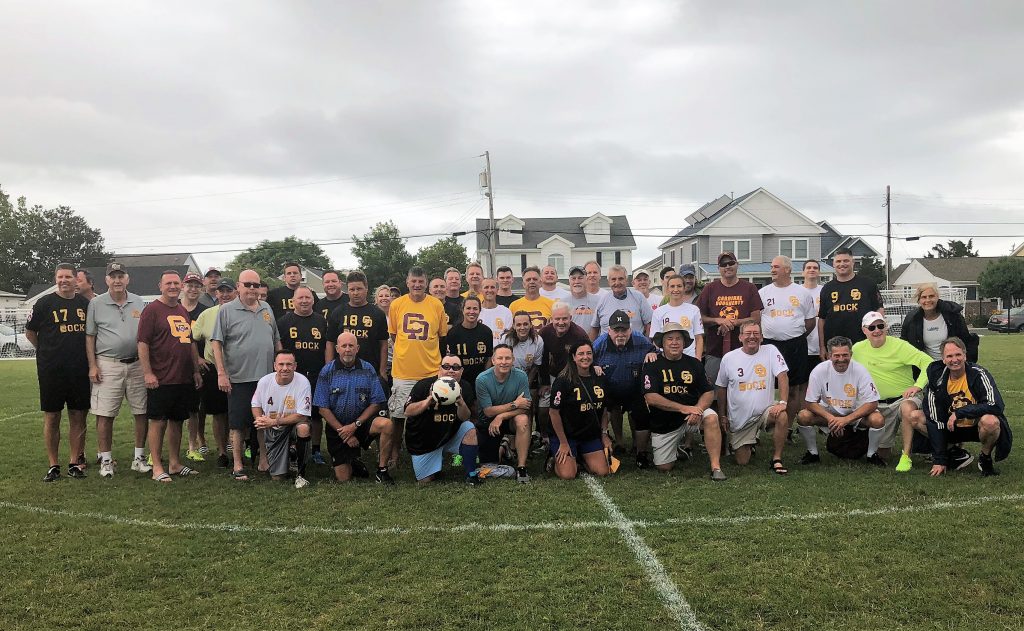 Participating players in the Cardinal Dougherty High School alumni soccer game pose for a photo just prior to the start of the contest Saturday at Bill Henfey Park in North Wildwood.