Danielle DeRitis makes a pass for the Cape May Tech girls basketball team.

Danielle DeRitis is working two jobs this summer, one at a well-known breakfast spot in Wildwood Crest, the other at a popular burger joint in Stone Harbor. 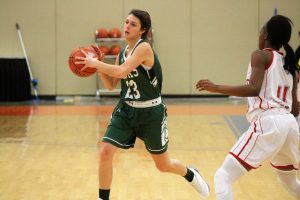 Danielle DeRitis makes a pass for the Cape May Tech girls basketball team.

DeRitis is used to being busy, however.

DeRitis graduated with honors last month from the Cape May County Technical High School, where she became the first athlete in school history to earn 12 varsity letters.

DeRitis was a member of the cross country, girls basketball and softball teams during her time in the Hawk athletic program, serving as a team captain in all three sports.

Sounds like an awful lot, but DeRitis wouldn’t have wanted it any other way.

“It was definitely a great experience that I wouldn’t trade for anything,” she said. “I met so many people and I was involved in a lot of things. The whole atmosphere and all the people I got to be involved with, it was amazing.

“I did have to learn how to manage everything. I had to split up my time with a lot of things. Time management was important.” 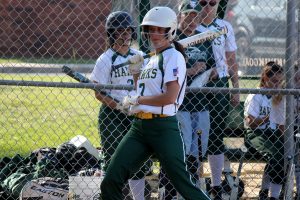 Danielle DeRitis at the plate for the Cape May Tech softball team.

DeRitis did not play on any championship-level teams at Cape May Tech. But her presence certainly made each one of them better.

“Because we weren’t such a high-ranked team in any sport, I tried to learn how to help my teammates learn the game and help them through the season,” she said. “I just tried to better our team and better our season a little. We tried to be humble. We knew we were never this amazing team that was going to win championships, so we all took part in helping each other and showing good sportsmanship.”

DeRitis gave even more service to the athletic program besides her efforts on the cross country course, the basketball court and the softball field. An accomplished singer, DeRitis often sang the National Anthem at home sporting events.

Her voice also came in handy a couple of years ago, when she served as Miss North Wildwood in 2016. She often sang at the many events she attended while performing those duties. 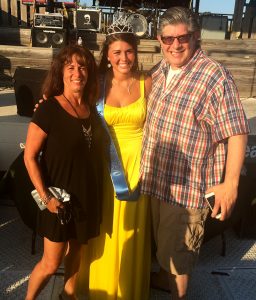 Danielle DeRitis, while serving as Miss North Wildwood in 2016, with her mother, Donna, and father, Steve.

DeRitis, 18, is set to attend Rowan University in the fall. She plans to study health and physical education and eventually wants to become a sports coach.

DeRitis has a long list of accomplishments at Cape May Tech on her resume. That came after a long deliberation about where to attend high school.

“I was hesitant at first to pick Cape May Tech,” she said. “But after my four years, it was amazing. I wouldn’t go back and pick any other school. I’m so glad I went there because I wouldn’t be in position I am today. To be the first one with 12 varsity letters, I’m pretty thankful I was able to accomplish that.”

If DeRitis continues on the same path, there’s no doubt many more accomplishments will come her way.