Gary Nagle of Middle Township is his school's all-time leader in career wrestling victories with 104. 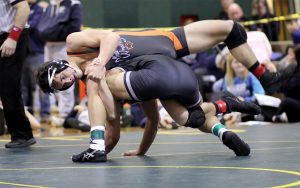 Gary Nagle of Middle Township is his school’s all-time leader in career wrestling victories with 104.

Football remained, but basketball and lacrosse eventually went by the wayside. They were replaced by wrestling and track and field.

And by the time Nagle finished, he put together one of the most extraordinary senior sports scholastic years in school history.

Nagle, an all-star in all three sports, is the first-ever CoastSportsToday.com Cape May County High School Male Athlete of the Year for the 2017-18 scholastic sports year.

Matt Wolf coached Nagle in all three sports. Was his head coach in wrestling and an assistant coach in football and track and field. So he saw the development firsthand.

“From his freshman year, you want to talk about a kid that did the work,” Wolf said, shaking his head. “He didn’t come into Middle as a projected star.”

He was by the time he left. 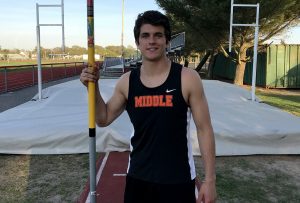 Gary Nagle broke a more than 45-year-old school record in the pole vault this spring.

A linebacker, Nagle led the football team in tackles, averaging nearly eight per game. A 170-pounder as a senior, he set program records with 41 wins as a senior and 104 career victories in wrestling, twice winning a district championship and qualifying for the state championships in 2018. And a pole vaulter in track and field, Nagle won county and Cape-Atlantic League championships while setting a new program record with a height of 13 feet. The previous record had been set more than 45 years ago.

Nagle was a league all-star in every sport.

“He changed two sports in high school, he didn’t even start track and field until he was a sophomore and he missed his entire sophomore year in football because of a torn labrum in his shoulder,” Wolf said. “So to see where he ended up, it’s really incredible.

“You really don’t see kids walk into wrestling for the first time when they get to high school and finish with 100 wins. It was the same thing in other sports. He missed a whole year of football but then came back and got better and better. Same thing in the pole vault. Better and better every year.

“Two-time district champion (in wrestling), Cape champion (in pole vault) — he just did things that have never been done before at Middle.”

Nagle is headed to Division III Ursinus College, where he plans to compete in both wrestling and the pole vault.

“It’s a good spot for him,” Wolf said. “He can do real well there. And it’s a great school for him academically.”

OTHERS CONSIDERED FOR COASTSPORTSTODAY.COM MALE ATHLETE OF YEAR HONORS

Charles Fields, Senior, Wildwood Catholic: Set numerous records in track, winning state titles in the 100, 200 and 4×100 relay and finished second in the 100 at the Meet of Champions. … One of South Jersey’s top defenders and capable offensive contributor for CAL championship basketball team. … going to Division II Georgian Court for track.