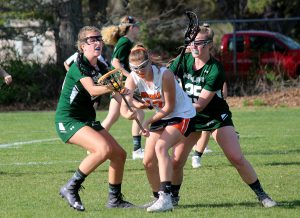 The Maverik National Lacrosse Classic was created to provide lacrosse athletes with a competitive venue to display their athletic skills, qualify for selection to represent their state in a national tournament and gain recognition by competing in front of NCAA lacrosse coaches of all levels.

Barber is considered one of the top young talents in New Jersey high school girls lacrosse.

Barber has posted 112 goals and 148 assists through her first two high school seasons for Middle. As a sophomore in 2018, she scored 66 goals and passed out a state-best 109 assists. She was named a first team Cape-Atlantic League all-star at midfielder.

Barber also carries a 4.43 grade point average, is a class representative in student government and is a member of the Key Club.