This spring the Ocean City High School baseball team (16-5) continued its remarkable success over the past decade.

Under first-year head coach Andrew Bristol, the Raiders won their third straight conference championship in the Cape-Atlantic League and fifth in the last nine seasons. Ocean City has had 10 straight winning seasons for the first time in 54 years and won its only two South Jersey championships in school history. And three of this year’s five losses were by one run and another was in extra innings.

The softball team (5-11) under veteran coach John Bruno, struggled this spring after having completed a four-year stretch with 39 wins – the most over four consecutive seasons in 27 years. Four of the softball losses this year were by two runs or less.

Both teams have talent returning in 2019. 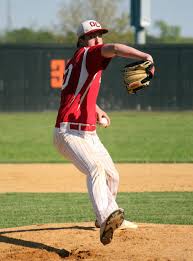 Bristol has lost Dan Nunan (above), his All-South Jersey pitcher, to the Anaheim Angels. Nunan has been the stopper the past two years, capping off with a 5-0 season and a 1.49 earned run average and almost two strikeouts per inning this spring. His 5-0 record ties the school record for best undefeated season, set by Jim Fansler in 1980.

Also gone are Issac Robertson, the team’s third leading hitter and stolen base leader; Parker Bristol, second on the team in RBIs; leadoff hitter Dom Monteleone, who led the team in runs scored; relief pitcher Frank Piernikowski; Syd Unsworth, who hit one of the team’s three home runs; Wyatt Stetzer, who was 2-0 on the mound; Peyton Bristol; and Sean Zellers.

They leave holes in the lineup. But OCHS will still have a strong pitching rotation. 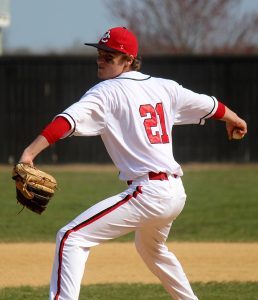 Brandon Lashley (above) will be back, with his .372 batting average, 4-2 won-lost record, 1.60 ERA and more than 12 strikeouts per seven innings. He figures to be one of South Jersey’s best pitchers again next season. And A.J. Campbell returns. He was 3-0 and his 0.66 ERA set a new school record, breaking the old mark (0.73) set by Pete Thomas 34 years ago. Tom Breazele, who had a 1.75 ERA in limited action, will be back. And Tom Finnegan, a 6-5 incoming freshman, should also add depth on the mound.

Also back will be the team’s leading hitter, Jaden Millstein – plus catcher Shane Ferry, who came on strong at the end of the season to finish .275, and Brandyn Pokrass, a good baserunner whose on-base percentage was well over .300. There are also a number of sophomores and freshmen who waited their turn and should be ready next spring.

Bruno will be back for his 20th softball season next year. He will also coach the boys basketball team for the 30th season, making him the first at OCHS to be a head varsity coach for a total of 50 different seasons. 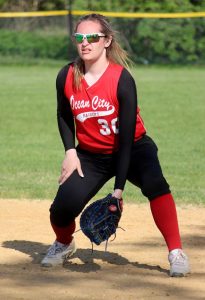 First baseman Jackie Nesi (above), who has led the team in hitting each of the last two years, both among the 10 best averages in school history, will be back. She also led the team with 14 runs batted in.

This year’s other three infielders will also return in 2019. Alex Vitola, a .418 hitter with 20 runs scored, will be back at second base; Savanna Holt (below), who hit .319 at shortstop; Hailey Neville, who batted .314, at third; and Abby Craige, who drove home 10 runs, behind the plate. 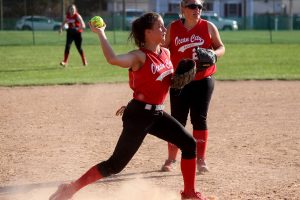 Lindsay Konick, a .383 hitter who led the team in stolen bases, will return in the outfield. So will Marissa Guido and Ashley Vitiello.

Catherine Faust, who hit .327 and shared the pitching duties with Vitiello and Neville, was the only significant graduation loss.

Baseball and softball are very competitive sports in the Cape-Atlantic League. But with the strong pitching coming back on the Ocean City High School baseball team and the experienced lineup in softball, the Raiders should be in the mix again next spring.

Check out how the OCHS baseball and softball players line up statistically with the rest of the Cape-Atlantic League here – http://www.primeevents.net/calspring.html.