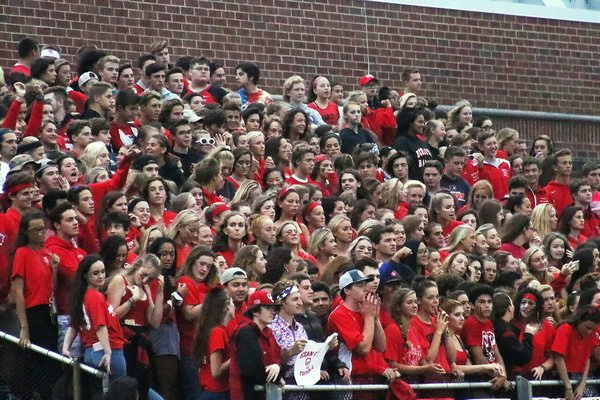 Add to that the two scores they put on the board within three minutes the previous week at Egg Harbor Township and you have a team that can keep the scoreboard operator busy. 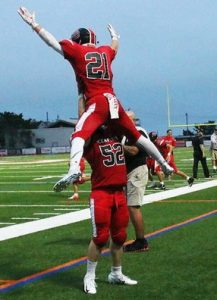 Along the way on Friday, senior Brandon Lashley  (above, celebrating a TD catch with Zac Clark) tied a school record with three touchdown catches in the game.

The win lifted Kevin Smith’s team to 2-0 with a game on the road in Galloway Township on Friday against division rival Absegami. OCHS is currently in first place in the Independence Division of the West Jersey Football League.

Like EHT the week before, Bridgeton scored first, turning a remarkable catch by Nashaloni Harris on a 37-yard pass completion into a one-yard TD run by Marquan Richmond.

That score held up until late in the opening period. 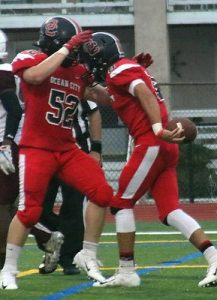 A pass from Ian Aungst to Brian Beckmann covered 36 yards and set up a five-yard TD run by Aungst (being congratulated by Clark) with 59 seconds left in the quarter. Then, Lou Conte recovered a fumbled kickoff at the Bridgeton 29. Two passes from Aungst to Jake Schneider (below, looking for an opening) covered those yards, the final 16 for the touchdown with 32 seconds left. 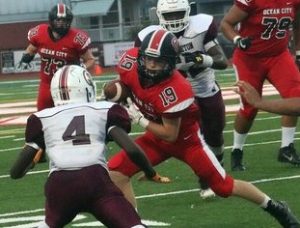 Aungst (14-for-25, 237 yards, 4 TDs) would throw another TD, this one to Lashley, halfway through the second quarter to complete a 90-yard drive. Two completions to Schneider and one to Brian Beckmann highlighted that drive.

Bridgeton would score with more than three minutes left in the half when quarterback Taz’mire Burton raced 48 yards down the left sideline to the end zone, reducing the lead to 20-12. But the Raiders were not finished.

They got the ball on Bridgeton’s 28 with 29 seconds left after a bad snap on a punt. Aungst completed two passes to Lashley (4 catches, 82 yards) the second from 12 yards for a TD.

Then it got weird.

With six seconds left before halftime Ocean City just wanted to keep the ball away from the quick Bridgeton backs. So the kickoff was a ground ball down the middle. However, the Bulldogs players did not react very quickly to the short kick and Beckmann did. The 5-11 junior raced downfield and covered the ball, giving Ocean City possession on the Bridgeton 37. Aungst threw to the end zone into triple coverage and Lashley went up and made the catch, tying the school record for TD receptions in a game and giving Ocean City a 34-12 lead at intermission.

Both teams scored once in the second half – Bridgeton on a 76-yard punt return by Shamar Love and Ocean City when Austin Green outhustled everybody and recovered a bad snap in the Bridgeton end zone. 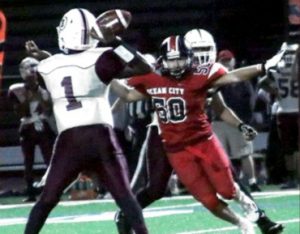 The Raiders had three sacks in the game – one each by Kevin King, Bill Kroeger and Brandon Lin – shown above, bearing down on Burton

The complete box score and the full-game video are available at http://www.primeevents.net/OCFBVideo2018.html.

EXTRA POINTS: Lashley tied the school record set by Dave Slaughter (twice) in 1974. Joe Myers (1976) did it once, Rick Lipford (1973) once, Scott Lipford (1996) three times and Bob Shallcross (2016) once …. Aungst has thrown for 394 yards and six touchdowns in his first two games. His four TD passes against Bridgeton fell one short of the school record of five set by Chris Curran in 2009 …. Bridgeton still leads the overall series between the two schools, 7-6. The two schools last played in football five years ago …. check out all OCHS daily results and schedules at the Raider Diary – http://www.oceancitysports.com/OCDiary.html.