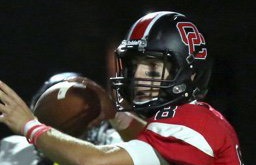 Aungst completed 23 of 48 passes on Friday in the 38-6 loss to St. Augustine Prep to set two new school records. The 23 completions broke the record of 20 set by Chris Curran in the 2009 Thanksgiving game against Pleasantville. And his 48 attempts broke a 47-year old record of 34 set by Jeff Foor against Hammonton in 1971. 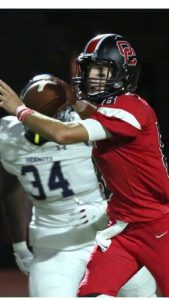 Earlier this season, against Bridgeton, Aungst threw four touchdown passes to miss the school record set by Curran against Cumberland in 2009 by one.

Through four games, Aungst has completed 54 of 111 passes for 744 yards and seven touchdowns. He shares the lead among all quarterbacks at Cape-Atlantic League schools with seven TD passes.

Of course, a strong passing game takes not only a quarterback who can throw but some players who can catch. And Ocean City has them. 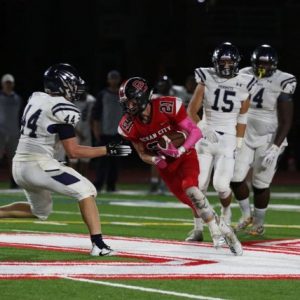 Senior Brandon Lashley (above) – who leads all CAL receivers with five touchdown catches, at least two of them quite spectacular – has 234 yards on 15 catches. Sophomore Jake Schneider (below), who has the speed to run away from a cheetah, has caught 14 for 230 yards. They are ranked second and third in yardage among CAL receivers. 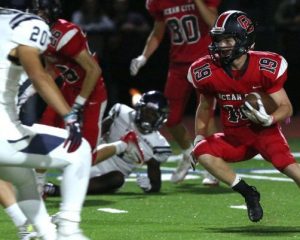 But there is also senior Bill Kroeger with 12 catches for 148 yards and junior Brian Beckmann, who missed one game, with six catches for 97 yards.

This OCHS team has been fun to watch because of an aggressive defense – led by Brandon Lin, Austin Green, Travis Stoerrle and Jake Inserra – and because of this record-setting passing attack.

There are three regular season games left, including division showdowns with Oakcrest and Mainland, plus a likely Group 4 playoff game and a Thanksgiving Day game in Pleasantville that should be very competitive.

The first four Fridays have been entertaining. The next stop is a crossover game Oct. 12 in Runnemede against Triton.

For box scores of all four games, plus season stats and video, visit www.OceanCitySports.com.