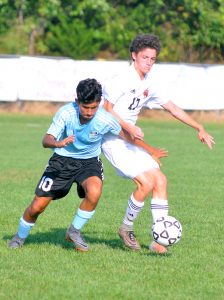 In the boys game, held in the afternoon at Lower Cape May, Middle got two goals from David Gardner in a 2-0 victory. The Panthers controlled the game throughout, generating six corner kicks to Lower Cape May’s zero. They also forced Lower goalie Mark Ryan to make 13 saves, while Middle keeper Braiden Scarpa needed to make just one stop for the shutout.

Middle improved to 6-4, while Lower Cape May dropped to 2-8.

In the girls game, played under the lights at the Boyd Street Field in Cape May Court House, Middle received goals from Logan Thomas, Nadine Coyle and Mia Rafter in a 3-0 victory. Thomas opened the scoring with 17 minutes to go before halftime on a beautiful strike from the top left corner of the penalty area that found the upper right goal of goal. Coyle added insurance midway through the second half but punching through the spilled rebound of a shot by Kira Sides. And Rafter closed the scoring with less than five minutes to play with a terrific blast into the upper right corner of goal from the right side of the penalty area.

Middle (5-4-1) also missed a penalty kick in the first half and struck the crossbar on a shot from distance early in the second half.

Brynn Bock made three saves in goal for the shutout. Molly McGuigan stopped eight shots for Lower Cape May (2-9).