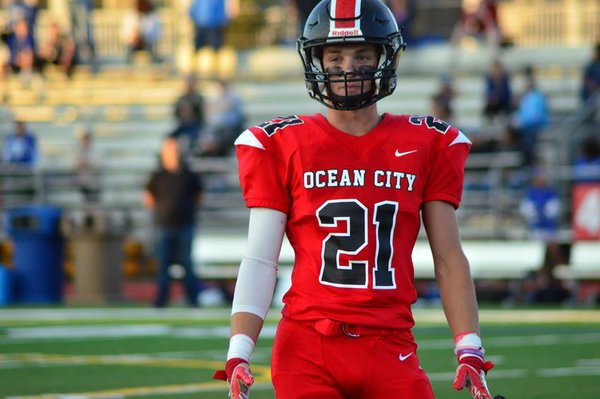 Brandon Lashley made his farewell to Carey Stadium memorable.

The Ocean City High School senior broke two school records and tied another in the Raiders’ 35-0 win over Washington Township in an NJSIAA consolation game. 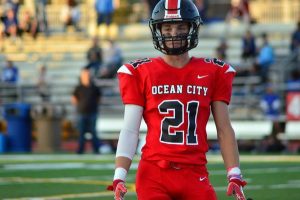 Lashley – one of the best baseball pitchers in South Jersey who is already committed to Stony Brook University – caught three touchdown passes to tie a school record for scoring catches in a game that he had already tied earlier. Those three gave him 13 TD catches this season, breaking the 22-year old school record of 12 set by Scott Lipford. And he intercepted two passes, bringing one of them back 105 yards to break a school record that had stood for 74 years.

This game was assigned by the NJSIAA as a consolation for teams that lost in the playoffs the week before. Ocean City had lost to Highland, 28-14, in the Group 4 playoffs and Washington Township to Williamstown, 31-3, in Group 5.

The Raiders scored first midway through the first quarter when senior quarterback Ian Aungst hit Lashley in stride at the goal line on a post pattern from 40 yards away.

Less than four minutes later, after Lashley returned a punt 38 yards to the Township seven, Kevin King scored his second TD of the season from a yard out.

Then, on the ensuing kickoff, King and Travis Stoerrle hit the Washington Township return back and the ball popped into the air. Jake Schneider grabbed it and OCHS had the ball on the Township 24. On the next play, Aungst found Lashley in the end zone and he made a leaping catch for the score.

In the second quarter Washington Township went for it, fourth down on the Ocean City 20. The pass was a little long for the receiver but Lashley jumped and grabbed it five yards deep into the end zone.

He took off behind a block by Jaden Tocci-Rogers, another by Bill Kroeger and an escort by Brandon Lin and Austin Green. Lashley then made a great cut at the Township 40 to freeze the last defender and complete his 105-yard sprint.

That touchdown broke the school record for an interception return. The previous record of 100 yards was set by Don Mulford in 1944.

Lashley added one more touchdown on a 12-yard pass from Aungst to complete his evening. Freshman Brendan McGonigle kicked all five extra points.

Aungst’s three TD passes increased his season total to 17, two short of the school record set by Al Genz in 1998. He also registered his ninth straight 100-yard-plus passing game, extending his school record and tying another.

Lashley’s four touchdowns is two short of the school record set by Kevin Sinclair in 1994 and done again by Sinclair two years later.

It was a big night for Lashley and his teammates in their final home game of the season. They go to Pleasantville on Thanksgiving morning hoping to complete a .500 season.

But they have a little more time to celebrate this one.

Check out all OCHS daily results and schedules in the Raider Diary – http://www.oceancitysports.com/OCDiary.html.