Julia Herrington is no stranger to championships.

The 2017 Ocean City High School graduate was on two state championship teams and four South Jersey winners in her four seasons with the Raiders. And she was a first team, Cape-Atlantic League all star in three of those seasons.

But this was something else.

“I’d have to say this is extremely different,” Herrington said after her North Carolina team won the NCAA championship. “There were cameras and reporters everywhere and the crowd was wild. It was some atmosphere. There were some similarities but playing for a national championship feels a lot bigger than a state championship.” 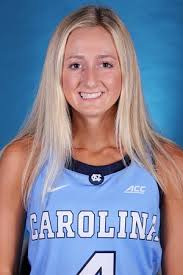 Herrington (above) is believed to be the third OCHS graduate to play for an NCAA Division One champion, joining Natalie Hunter (Maryland field hockey 2010 and 2011) and Doug Colman (Nebraska football 1994 and 1995).

The Tar Heels finished the season 23-0 and outscored four opponents a combined 19-3 in the NCAA Division One Tournament to win the school’s first national title since 2009 and seventh overall.

Herrington, a red-shirt freshman, played in 10 games this year, including wins over Michigan, Penn, Duke and Virginia.

“I think that (red-shirting) was one of my best decisions,” Herrington said. “I think I definitely needed a year to learn how to play at the college level. In high school I played on grass and on field turf. At North Carolina we mostly play on Astroturf and it is almost a completely different game. It is a lot faster game and there are some other skills you need to develop.”

Herrington was not the only former OCHS player who was part of a team in this year’s NCAA Tournament.

No. 11 Rutgers (13-6) is coached by Meredith Long Civico, who led OCHS in scoring with 23 goals in 2000. She is in her seventh season as head coach of the Scarlet Knights, who lost to UConn, 5-0, in the first round this year.

Red-shirt junior Lauren McNally didn’t actually get to play in the NCAA Tournament because of a mid-season injury. But No. 14 ranked Penn State (12-6) lost to Harvard, 6-1, in the first round. McNally played in 11 games on defense for the Nittany Lions, eight as a starter, before her injury.

In addition to the D1 tournament teams, No. 7 ranked College of New Jersey (16-5) played in the D3 Tournament and won twice, losing to Middlebury, 5-1, in the regional final. Junior Jordan Allegretto had three goals and two assists for the Lions this year. Lainie Allegretto, Jordan’s freshman sister, was also on the TCNJ team. 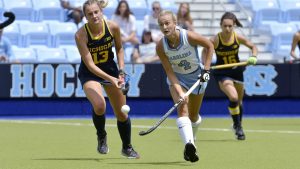 Herrington believed she got the preparation she needed for college field hockey by playing for Ocean City.

“My coach (Cory Terry) definitely prepared me very well for playing at the college level. She helped me mentally and with field skills but she also helped me grow personally. She was an inspiration for me and I can probably speak for any other Ocean City girl who is playing at the college level now. She definitely shaped us and prepared us for the next level. Her success in high school and college gave her a background that was a big factor.”

Terry, who retired as Ocean City head coach after the 2016 season and was just inducted into the OCHS Sports Hall of Fame, was Cory Picketts when she led South Jersey in scoring twice and played on three state championship teams with the Raiders. She went on to lead Princeton University to the NCAA Final Four.

“I know this is something that not a lot of people get to experience,” Herrington said. “I feel like it is a once-in-a-lifetime experience. But I’m reluctant to say that because I hope it happens to me three more times.”