The Division III Ospreys took on Division I Penn at the famed Palestra and, not surprisingly, suffered a lopsided loss, 112-63.

But the game, considered an exhibition for Stockton, was more about the experience than the result. 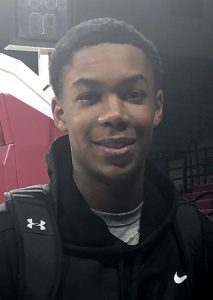 Flanders, a freshman from Wildwood High School, scored two points on a pair of first-half free throws in the loss. He also had four rebounds, an assist and a steal while playing 12 minutes off the bench.

“It was definitely a great experience, especially in my first year as a freshman,” Flanders said. “I had to get all the nervousness out. I thought I played fairly well. This will push me the rest of the year to get better.”

Dubbed the “Cathedral of College Basketball,” the Palestra is one of the most famous basketball arenas in the country. In addition to serving as Penn’s home court, hundreds of Big 5 games have been played in the 8,700-seat arena since the building opened in 1927. In fact, since its inception, no arena in the country has hosted more college basketball games. Numerous high-level high school games have also been played there.

The Palestra’s seating is practically on top of the court. There is no barrier separating the fans from the court.

The arena’s concourse is a walking history of both Penn basketball and the Big 5, complete with dozens of photos, plaques and trophies. There’s even a photo of former Lower Cape May star Charlie Wise, who was a standout player at LaSalle in the mid 1970s, included in a collage dedicated to past Explorer greats.

Saturday’s game was played in front of an announced crowd of 2,268. A couple hundred Stockton fans made the trip.

“Even before we got in the gym, seeing everything around campus and the school, it’s just beautiful here,” Flanders said. “It was a great honor to be on the court. I would love to come back and play here again somehow.”

Flanders, a career 2,000-point high school scorer who graduated from Wildwood in June, is averaging 5.3 points and about 20 minutes per game for the Ospreys, not including the exhibition loss to Penn. Stockton is 2-1 overall.