VIDEO: Lumbruno does it all in latest Caper Tiger victory

FRANKLINVILLE- Cross country has always been a successful sport at Ocean City High School. There have been many championships over the years. But today the Raiders made history. 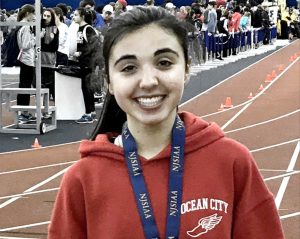 Palmieri (above), who finished fourth in last year’s race, came home 13 seconds in front of the second place runner from Seneca. It marks the 13th time an OCHS girl has won a South Jersey cross country championship but only the second time it was done by a sophomore. Brittany Sedberry, recently inducted into the OCHS Sports Hall of Fame, was a sophomore in 2003 when she won the second of her three South Jersey titles. 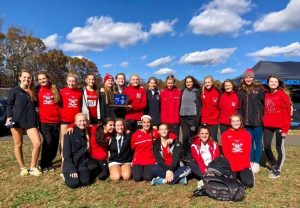 This was the second straight sectional title for Trish Henry’s team (above), the fifth during her 16 seasons and the 10th all-time for the Raiders.

Mainland junior Kevin Antczak breezed to an individual championship in the boys race, winning by more than 40 seconds. But OCHS junior Anthony Conte took second and was the beginning of a red wave. Junior Luke Kramer was third for the Raiders (below), senior Gavyn Fox was fifth, junior Max Kelly took sixth and sophomore Tyler Greene finished seventh. 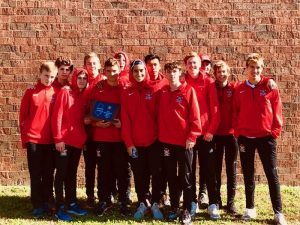 It was Ocean City’s first South Jersey boys title since 2010, though Matt Purdue’s Raiders did finish second six straight years from 2011 through 2016. It was the sixth South Jersey boys championship in history for OCHS and it must have been very satisfying to beat Mainland again. Ocean City edged the Mustangs in the Cape-Atlantic League Meet but lost to the Mustangs during the dual meet season, ending a 91-meet win streak for the Raiders.

Both teams will now move on to the NJSIAA State Group 3 Meet next Saturday at Holmdel Park. The boys have never won a state championship, finishing second twice. The Ocean City girls won their only state cross country title 30 years ago in 1988.

But today both teams combined to make history.

You can find the daily results and schedules of all OCHS sports in the Raider Diary – http://www.oceancitysports.com/OCDiary.html.