Players from the Wildwood Junior Warriors with helmets featuring the ProTech shells designed to reduce the effects of head trauma. No Junior Warrior player received a concussion this fall, according to program president Rich Hans. 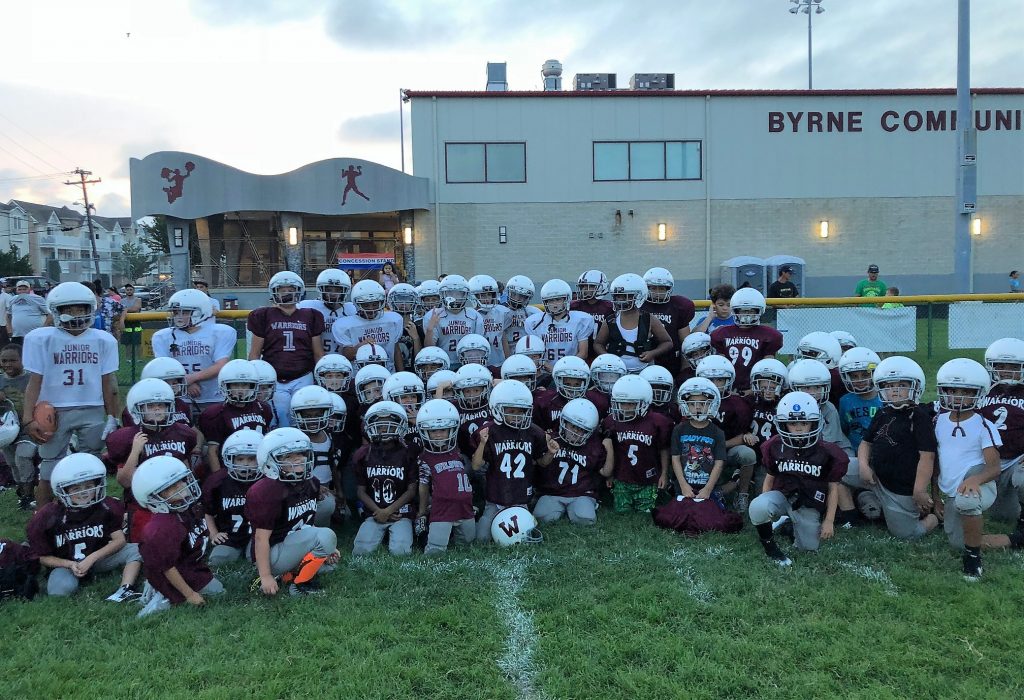 Players from the Wildwood Junior Warriors with helmets featuring the ProTech shells designed to reduce the effects of head trauma. No Junior Warrior player received a concussion this fall, according to program president Rich Hans.

Rich Hans has led the Wildwood Junior Warriors football program since its resurrection five years ago.

For the first time since the program was revived in 2014, he said none of the program’s approximately 100 players suffered a concussion this season.

“That’s every level,” Hans said. “We didn’t have one concussion. We’ve had them every year in the past, usually at least two or three a year. This year, not one.”

This fall, for the first time, the Wildwood Junior Warriors experimented with the ProTech helmet shell, a product patented by Defend Your Head, a company whose mission, according to its website, “is to reduce head trauma for all contact sports, military and industrial applications.”

For football, ProTech is a shell attached to helmets that, according to the website, “utilizes specialized material to reduce the risk of injury due to blunt force trauma.”

“There’s nothing that can totally stop concussions, but without a doubt the ProTechs helped big time,” said Hans, whose father, Gary, another leader of the Junior Warriors, was also involved in the decision to use ProTechs for the program’s players.

Hans and the Junior Warriors became away of the ProTech technology through 1984 Wildwood High School graduate Billy Osborn, who is Defend Your Head’s senior vice president for strategic business development. Osborn said the Junior Warriors were the first South Jersey youth program to use ProTechs.

Osborn, a former University of Pittsburgh football star and college and professional football broadcaster and analyst, has been at the forefront of football’s efforts to reduce the risk of head injuries through improved helmet technology. Osborn worked in the medical device industry before returning to his football roots with VICIS, a company involved in football head safety gear. He left VICIS earlier this year to join Defend Your Head, a company based in southeastern Pennsylvania whose executives include a handful of former college and professional football players such as Glenn Tilley, John Roman, John Loughery, John Zeglinski and others.

Hans was so impressed with the effectiveness of the ProTech shells on his program’s players that he sent a glowing email to the company.

“This was the first year we finished a season without one single concussion,” Hans wrote. “There is no doubt in my mind that the reason for this was the choice we made to put a ProTech shell on every helmet before we put our kids out on the field.”

Osborn, obviously, was delighted to learn the technology was effective for the youth football players in his hometown.

“I’m extremely proud and happy that the Wildwood youth program used the ProTechs and that they really worked for them,” Osborn said. “Obviously this is a person and an organization that I’ve had a great relationship with and it’s my hometown. To get such positive feedback, everyone in the company feels proud and good because these ProTechs are making a dramatic impact for the players who wear them.

“It’s one thing for us to say it or for tests to say it. But when you get great feedback from players and parents and coaches like we’re getting now, it’s really moving and it’s impactful.”

Those test results are also giving glowing reviews of the ProTech product. According to a recent Penn State study, ProTech shells dramatically decreased higher intensity sub-maximal impacts. The study showed that linemen using ProTech shells had sub-maximal impacts reduced nearly in half compared to those who did not use ProTechs. Other studies showed other kinds of impacts were reduced as much as 70 percent.

The ProTech is a shell that snaps into the top of an existing helmet, giving a bit of a “bubble” look to the helmet.

“At first glance, it’s kind of bulky looking but when you pick it up it’s so light,” Hans said. “I asked a couple of the kids if they could tell a difference and they said they could a little bit but not much. Then as the season went on, they didn’t notice it at all.”

That bubble is providing an important extra layer of protection.

The ProTechs are catching on fast. A Buxmont, Pa., youth program recently ordered nearly 200 shells. And a Philadelphia Catholic League game between Roman Catholic and Conwell-Egan this fall became the first high school game in which both teams’ players wore the ProTech shells on their helmets.

With two sons heavily involved in the game, Osborn has a personal stake in the safety issues surrounding football. Billy, 16, is a quarterback at Cherokee High School in Marlton who missed his sophomore season due to an arm injury. Trent, 13, is a seventh-grader who plays wide receiver and defensive back for the Marlton youth program.

Osborn said Defend Your Head is actively involved with approximately 250 teams from all levels of football, including 80 youth programs in the Delaware Valley.

“There are a lot of opportunities for work out there and to do things but to be involved in a company with a lot of guys with a football background, some of them very good players for their teams, and all of them wore football helmets and almost all of them received a concussion, to be part of something like this is really exciting,” Osborn said. “We all truly believe in the mission and we’re doing what we can to get the awareness out there. To be able to have a product that helps address the safety concerns for the youth of America playing football, it’s exciting and it’s humbling and it’s very encouraging. It makes you very proud and happy to be involved with it.”