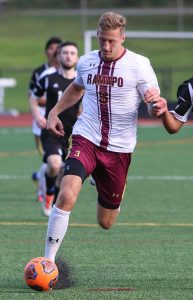 The junior striker has been named a third team All-America selection by the United Soccer Coaches after scoring a program-record 27 goals for the Roadrunners in 2018.

Fala also set new Ramapo marks in single-season points (61) and single-season game-winning goals (11) and tied for second on the team with seven assists.

Fala scored the game-winner to help propel the Roadrunners to their first-ever NCAA Sweet 16 appearance in a 1-0 win over Connecticut College in the second round of the Division III Tournament.

Fala’s 27 goals were good for second nationally in Division III. Nick West of Messiah College was the leader with 30.

Fala is a 2016 graduate of Middle Township High School.