Hills gets invite to Collegiate Bowl

Some of the leaders from the Middle Township High School swimming teams include (from left) Julia Mallett, Maddie Deane, Bridget Donohue, Baylee Pelouze and Brendon Bartha.

In a rare scheduling quirk, all five Cape May County swimming teams are set to open their seasons on Tuesday.

Ocean City, with much greater depth than the rest, will again be the class of the county in both boys and girls swimming. The Raider girls are coming off an appearance in a South Jersey final last season.

The teams at Cape May Tech and Middle Township hope to do enough to qualify for the state playoffs, while those at Lower Cape May and Wildwood Catholic will look for individual successes.

The following is a look at each of the Cape May County high school swimming programs: 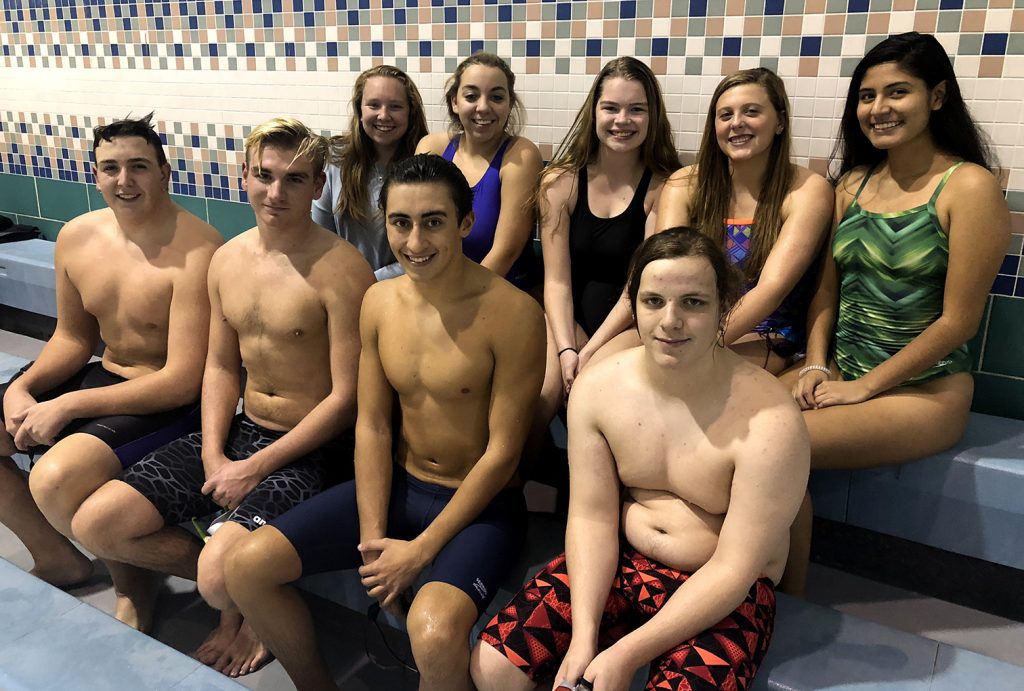 Cape May Tech’s boys team begins the new season with some strong swimmers but lacking in depth.

“We’re really loaded in the central lane. We haven’t been this loaded there in a while,” said Tech coach Matt McElroy. “But we don’t have the outside lane strength that we’ve had in the past. Hopefully as the year goes on that will develop. We have a lot of new guys coming on well.

“Our schedule breaks our way because we have a couple of our tougher meets later in the season. Hopefully that allows for some of our younger swimmers a chance to improve.

“The goal for us is to have a winning season and make the playoffs.”

Tech’s girls team has a new head coach in Dawn Dudley, who was a standout swimmer at Wildwood Catholic in the early 2000s.

“Being a new coach, it’s hard to say how we might do,” Dudley said. “But we have a very dedicated group of girls. They’re great to work with.”

Cape May Tech’s teams open the season Tuesday at Buena. 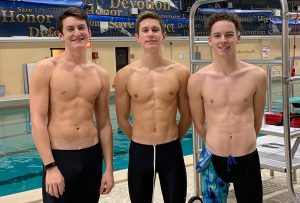 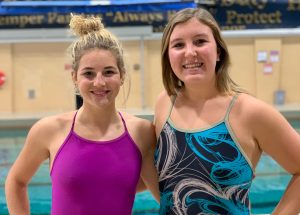 Senior Christina Adams (left) and junior Samantha Downes are the captains for the Lower Cape May Regional swimming team.

Lower Cape May enters its second season having separate boys and girls teams, after competing as a coed program for years.

“For the boys, we should have a handful of them qualify for the South Jersey Invitational, which will be nice for us,” said Britney O’Donnell, who serves as head coach for both teams. “We don’t have the depth in every event for both the boys and the girls but some of them should have some really good swims.” 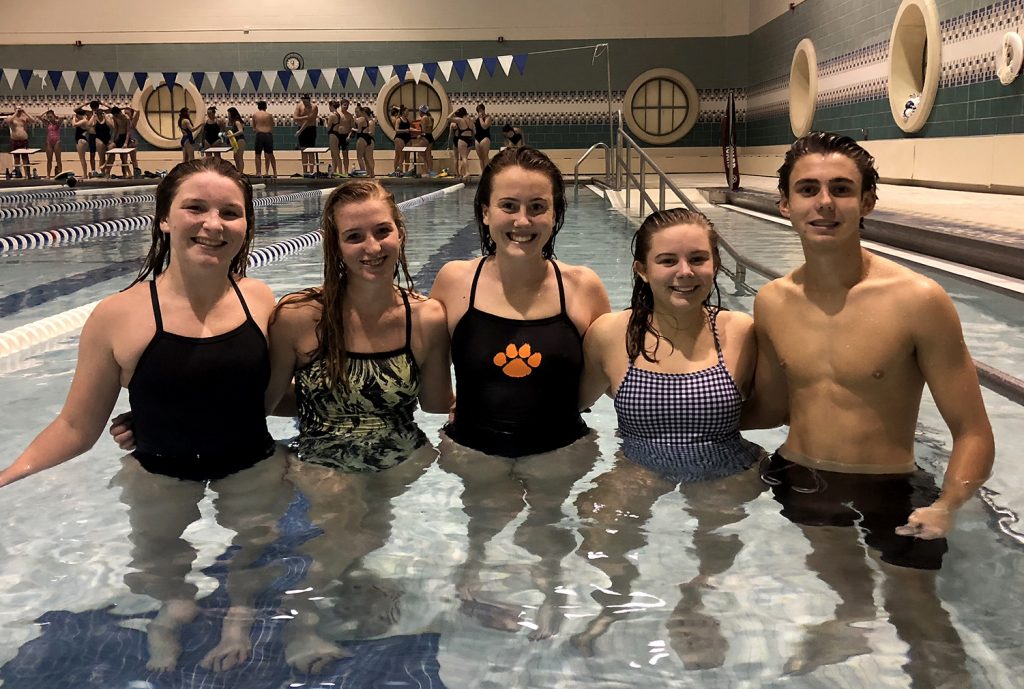 Some of the leaders from the Middle Township High School swimming teams include (from left) Julia Mallett, Maddie Deane, Bridget Donohue, Baylee Pelouze and Brendon Bartha.

Middle Township’s teams were each competitive a season ago, both winning a first-round state playoff meet. They hope for the same kind of success this winter.

Middle’s boys team is a bit light on numbers compared to some recent seasons by the Panthers should still do well against many of the teams on their schedule.

“The boys should be competitive in the CAL,” said DeDe Bosacco, the head coach of both of Middle’s teams. “And we’re looking forward to all our new swimmers improving throughout the year.”

“I think the girls can be a CAL (National Conference) contender,” Bosacco said. “We should be able to compete in our tougher meets.”

Tadgh Campbell and Kirsten Logan are the program’s assistant coaches.

Middle hosts Wildwood Catholic in a coed meet on Tuesday. 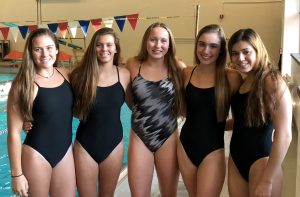 After a 1-3 December last year, the Ocean City boys ream rolled off eight straight wins, including one in the opening round of the NJSIAA Tournament, to finish 9-4. Coach Shane McGrath (40-22 in five seasons) has some experienced swimmers from that team returning.

Ocean City opens its season Tuesday against Atlantic City at the Aquatic & Fitness Center. The Raiders have non-league meets with Woodstown and Washington Township.

Ocean City’s girls team comes off a 9-3 season that ended with a loss in the South Jersey championship meet to Moorestown. Coach Ian Keyser, a former star swimmer for St. Augustine Prep and Seton Hall University, starts his second year.

A trio of freshmen are also expected to be key factors on this team. They are Ava Kelly, Olivia Scherbin and Lilly Teofanova.

Keyser has a team of young swimmers, most with varsity experience, who should keep the Raiders on or near the top for years. OCHS opens the season Tuesday at Atlantic City. The Raiders have non-league meets with Woodstown, Cherry Hill East and Washington Township. 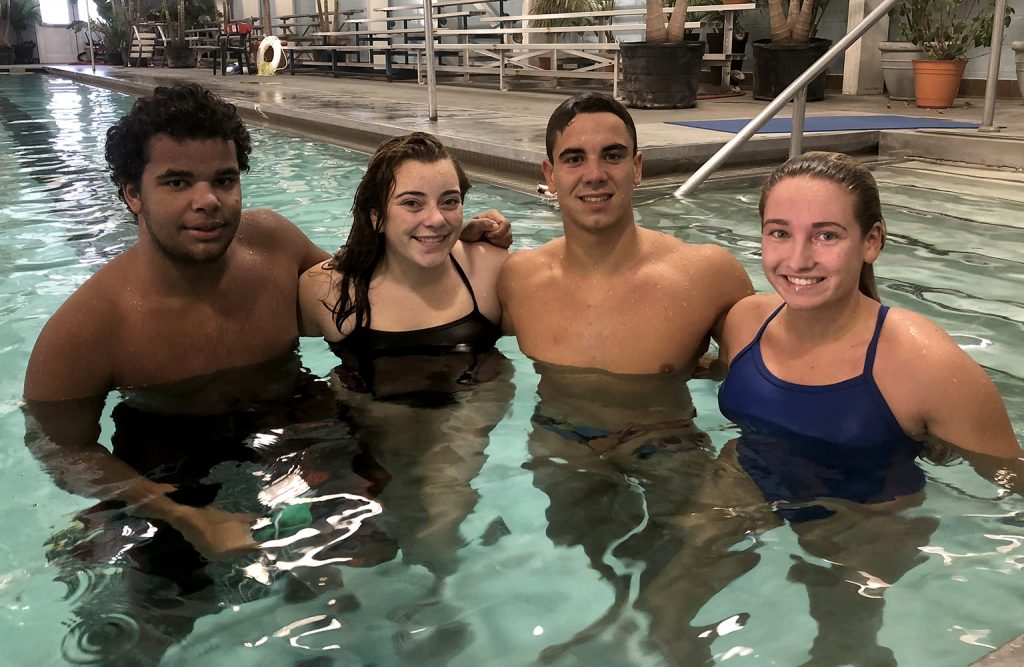 Wildwood Catholic has increased numbers this winter but will still be competing as a coed team during the regular season.

Top juniors include Grace Stuart and Cole Diller. The sophomore group is led by Julia Sorensen and James Sawyer. Leilani Wong is the team’s top freshman.

“I think we’ll have a normal Wildwood Catholic year — solid and competitive,” Crusader coach Chris Gamble said. “Some meets we’ll do just fine and others we just won’t have the depth. We’re hoping to get a few wins this season.”