Wildwood Catholic juniors Jahlil White (left) and Taj Thweatt have each received multiple Division I college offers. They're hoping to lead the Crusaders to another championship-level season this winter. 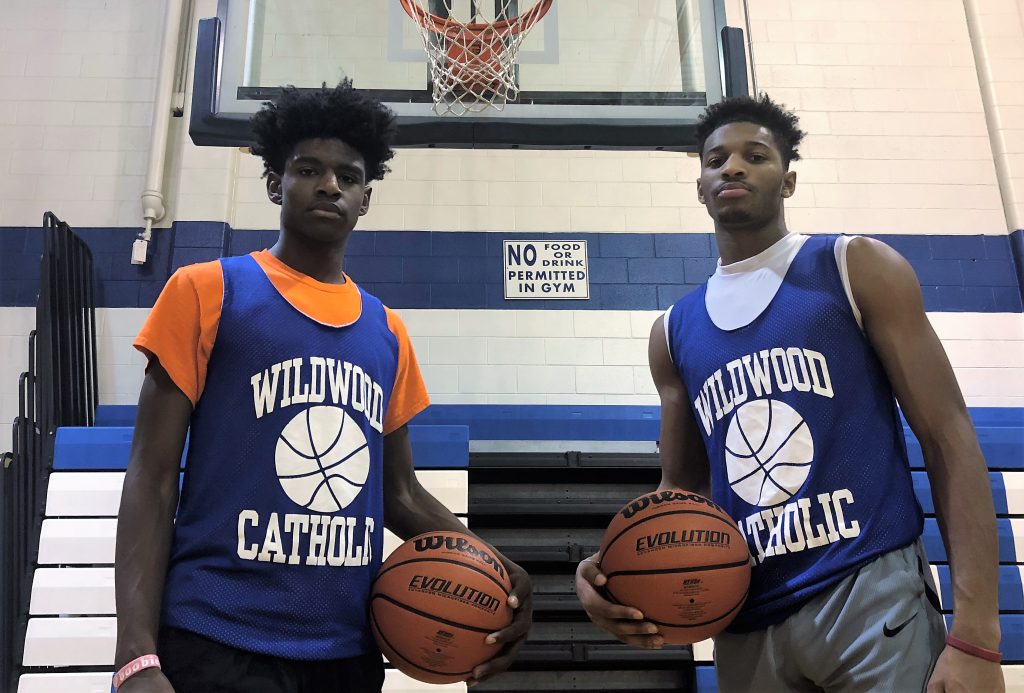 Wildwood Catholic juniors Jahlil White (left) and Taj Thweatt have each received multiple Division I college offers. They’re hoping to lead the Crusaders to another championship-level season this winter.

Now, the potential for the two talented juniors seems limitless.

Thweatt and White were often the talk of the South Jersey high school basketball community during the offseason. It seemed almost weekly that each received a scholarship offer from a Division I college.

All that college interest, however, doesn’t give Thweatt and White any advantage over the competition when the season starts Friday against Holy Spirit.

“They work hard every single day but one of my jobs is to make them realize they have a long way to go,” Wildwood Catholic coach Dave DeWeese said. “They still have to improve some aspects of their game. They can both get a lot better. Our goal is to get them to understand that.”

Exponential improvement has already been shown by both players.

Thweatt averaged 13.0 points and 7.6 rebounds for the Crusaders last winter. But nearly all of his baskets were on layups, dunks and other shots in the lane. This season, DeWeese expects him to be a perimeter threat as well. Thweatt displayed those talents at a recent practice, consistently draining outside shots.

“Taj worked very hard in the offseason to improve his three-point shot and his ball handling,” DeWeese said. “Now he’s capable of playing inside and outside for us. We have the confidence in him that he can pretty much play any position except point guard at this point.”

White’s numbers were more modest as a sophomore. He averaged 7.9 points and finished second on the team in assists with 62. But he came on tremendously down the stretch. Many viewed his performance against St. Augustine in the CAL playoff tournament semifinal – he had 17 points on 8-of-9 shooting – as White’s arrival as a CAL star. Originally thought of as more of a slasher, White is also now viewed as a capable facilitator.

“His improvement from this time last year to this time now is amazing,” DeWeese said of White. “To go from where he was to where he is today, it’s been a huge leap. What’s really crazy is that he still has a long way to go. He has a huge, huge upside.”

The recruiting process has been a learning experience for both players, they said.

“The recruiting is fun. I like it,” White said. “It gives me a lot of confidence that college coaches believe in me.”

Thweatt and White are ready to put the hype aside and go out and perform this season.

“It’s not that hard to not pay attention to it,” Thweatt said. “Just have to focus game by game and do the best I can to get the team a ‘W.’”

Both know much is expected of them as leaders.

“We have to play a big part, especially on defense,” Thweatt said. “Defense is really key for us this year. We lost a couple good defensive players from last year. We have to go out and play hard and show everyone.”

DeWeese figures the continued improvement of his two star players will only help the team as a whole.

“Both of them, on their own, have improved tremendously from this time last year to now,” he said. “Hopefully we can continue them on that track to get them to fulfill their potential. And that’ll only help us as a program.”