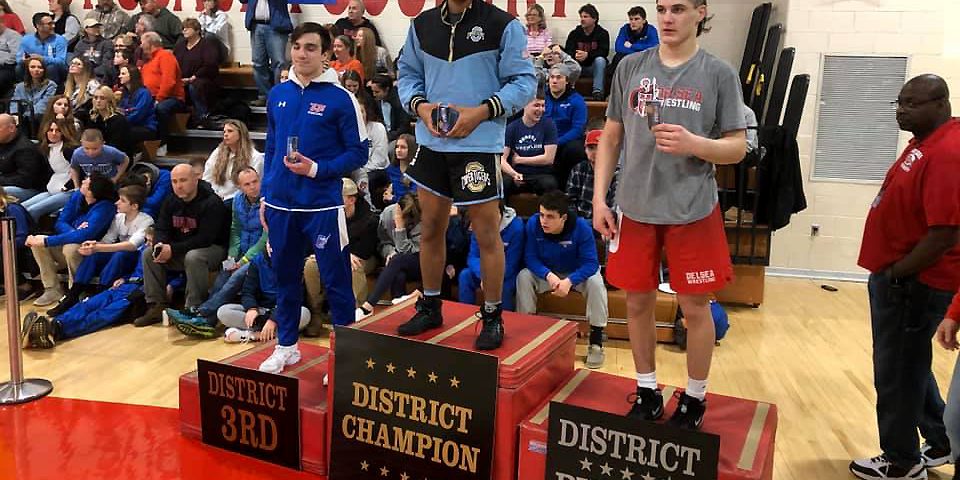 Sophomore Brayden Castillo and junior Marcus Hebron of Lower Cape May emerged as champions to highlight the efforts of the two area high school wrestling teams at the district tournaments on Saturday.

Four other Lower Cape May wrestlers kept their seasons alive by also finishing among the top three in their respective weight classes. Wesley Tosto (126) and Christian Campanaro (152) each placed second, while David Tosto (138) and Sean Connelly (220) both picked up a third-place finish.

Lower’s Castillo, the second seed at 160 pounds, won his district championship bout in dramatic fashion, posting a 6-4 sudden-victory over top-seeded Asa Walton of Delsea. Castillo had won his quarterfinal and semifinal bouts by fall. Castilo takes a record of 20-5 into the region tournament.

Hebron, the top seed at 195 pounds, decked Winslow Township’s Emeril Mitchell, the No. 2 seed, in 1:39 in the title bout. He also won his quarterfinal and semifinal bouts by fall. Hebron, who sat out the first 30 days of the season after transferring from Middle Township, remains unbeaten in 16 matches.

Campanaro finished second after a stirring run through the bracket as a No. 6 seed at 152. He pinned third-seeded Josh Mensah of Oakcrest in the quarterfinal round in 5:07 before recording another third-period win by fall over seventh-seeded Eric Gibson of Winslow Township. He then lost by fall in 3:10 in the title bout to top-seeded Jared Schope of Delsea.

Tosto, the top seed at 126 pounds, pinned Washington Township’s Robert DuCoin in 13 seconds in his opener before scoring a narrow 8-4 decision over No. 4 Nicholas Faldetta of Egg Harbor Township in the semifinal. He lost by fall to

Oakcrest’s David Flippen in 4:56 in the title match.

Lower Cape May finished fourth in team scoring out of 10 teams at District 30.

The Giulian brothers each advanced to the Region 8 Tournament through their second-place finishes for Middle at the District 31 Tournament at Williamstown. Karl, a senior and the No. 2 seed at 160, won by fall in 1:20 over No. 7 Omari Watson of Clayton in his opener before scoring a 4-3 decision over No. 3 Matt Curran of Williamstown in the semifinal. He then lost by 17-7 major decision to top-seeded Alex Marshall of St. Augustine in the title bout.

Dave, a sophomore and the second seed at 182, pinned third-seeded Nick Marshall of St. Augustine in the semifinal after receiving a quarterfinal-round bye. He then lost by 16-7 major decision in the title bout.

Middle Township was dealt a blow before the tournament. Sophomore Alick Killian was ruled out for the season after a shoulder injury suffered in the team’s state playoff match against West Deptford.

As district champions, Castillo and Hebron will skip the preliminaries and will first wrestle at the Region 8 Tournament on Friday. The second- and third-place finishers will each wrestle Wednesday, with winners advancing to Friday.