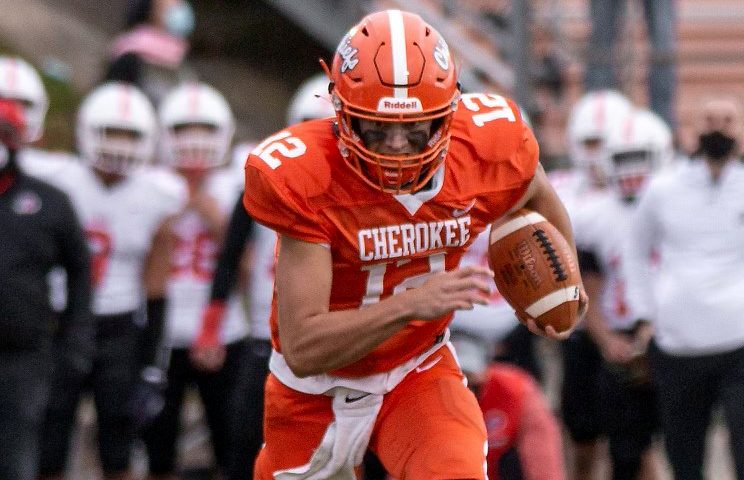 Billy Osborn III understands what it’s like to play football in the shadow of a legend.

His father, Billy Jr., was a standout athlete and still an iconic figure at Wildwood High School, where many consider him the school’s greatest athlete. He excelled in football, basketball and baseball and was good enough to play all three at the University of Pittsburgh. He eventually played a few seasons of professional football, spending one season on the practice squad of the Eagles.

“People ask me that a lot,” Billy III said with a laugh. “They say, ‘You must feel a lot of pressure.’ But it isn’t pressure to me. He was a very good athlete and I would like to be that good. The great thing is, I’ve never felt pressure from him. He’s always let me play the sports I wanted and he’s always been really supportive.

“There’s some pressure there but that’s mainly from myself just wanting to be better. It’s never from my dad. He actually relaxes me more than anything.”

Billy III shouldn’t have to answer questions about trying to live up to the athletic standards set by his father, however. His accomplishments stand out just fine on their own.

A 6-4, 195-pound starting quarterback at Cherokee High School, a Group V power in Marlton, Billy Osborn III became the first Chief player to pass for more than 3,000 career yards. He finished his career with 3,160 passing yards, blowing past the previous record of 2,840 yards set a decade ago by Andy Martin. He did so despite playing just two seasons of varsity football, following an elbow injury that forced him to miss his entire sophomore season.

With Osborn leading the way, Cherokee emerged as one of the top public school teams in the state over the past two seasons.

After a slow start to last season that saw the team at 3-5 entering the Central Jersey playoffs, Cherokee got hot at the right time and won three straight games to emerge as sectional champions.

This season, the Chiefs won each of their first five games before an overtime loss to Lenape in a pod semifinal and a one-point loss to non-public power St. Joseph (Montvale). One of the team’s victories was a 37-8 result over the Hun School, a prep power.

“Last year was definitely a building year for our seniors class,” Billy III said. “Turning our season around in the playoffs last year was really special. We were lucky to get a championship game at home and then win it. And then this year to go 5-2 and beat Hun and lose two games by four points (total) to two of the best teams in the state — it was a really great year.”

With a chance to perform in 13 games as a junior, Billy III also broke a 20-year single-season passing record by throwing for 2,041 yards. He then threw for well over 1,110 yards as a senior in just seven games, despite not playing in the final quarter of four of the team’s victories due to lopsided scores. He completed 82 of 128 passing attempts (64 percent) and threw 13 touchdowns against just two interceptions as a senior.

“I watched a lot of great football players in front of me. I’ve lived in Marlton all my life and I remember going to games when I was little,” Billy III said. “It’s pretty surreal to break those records. It really hasn’t hit me yet that my name is up there. It’s special, especially because I had some really good players around me that there’s no way I could have gotten the records without everything they did. We had great wide receivers and then our (offensive) line, I felt like I never had to worry about getting sacked. To have those records is crazy to me.”

Billy III credits his father with helping him with his achievements.

“Whenever we’d watch NFL games, he’d pause it sometimes and say, ‘Look at this,’ or ‘Look at that,’” Billy III said. “Sometimes I didn’t really understand why he was doing it. What I didn’t realize then was that he was setting me up well. Now we talk through all that stuff. We talk about coverages, defenses and it’s stuff that I heard right out of his mouth when I was younger. Being in a football world at a young age has had its benefits in the long run.”

Billy III, 18, whose younger brother, Trent, was a starting wide receiver for Cherokee’s freshman team this fall, also receives a lot of support from his mother, Jami.

“She’s almost as immersed in football as my dad is,” Billy III said with a laugh. “She’s completely supportive. She loves football. And she’s always helping me with what I eat to help me get bigger and stronger.”

Billy III has received college interest from a variety of Football Championship Subdivision (FCS, formerly Division I-AA) teams and some high-level programs at lower levels. Furman, Monmouth, Wagner and others have been among the suitors.

With lots of family and friends still in the Wildwoods and the lower Cape May County area, Billy III said he was appreciative of the support he’s received from afar.

“I have a lot of family down there but this year was especially tough to get tickets for everyone (due to COVID-19 restrictions),” Billy III said. “But my dad sometimes brought some of his friends from down there to the games. I talk to my cousin Will (Long, a basketball player at Widener University who is also a Wildwood High graduate) a lot and I do hear of a good amount of support from down there. I spend a lot of time down in Wildwood in the summer so I know a decent amount of people down there.”