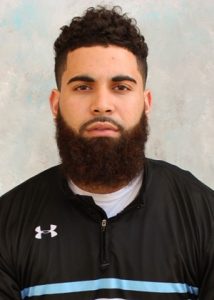 Harmon, a 6-5 senior forward, scored 26 points and pulled down 13 rebounds to lead the Ospreys to a 78-65 win over Centenary in the tournament opener on Friday. Both totals were career bests. Harmon shot 9 for 15 from the floor, including 5 for 7 from three-point range, and also made three of his four free-throw attempts.

On Saturday, Harmon provided 13 points and 12 rebounds in a 67-56 win over Morrisville State in the tournament title game. He made 4 of 13 three-point attempts.

Stockton exited the tournament at 3-0 overall. The team is scheduled to play is first New Jersey Athletic Conference game Tuesday at rival Rowan.

Harmon is averaging 19.0 points and 11.0 rebounds through three games. He is a 2011 graduate of Middle. The career 1,000-point scorer helped the Panthers win the 2011 South Jersey Group II title.