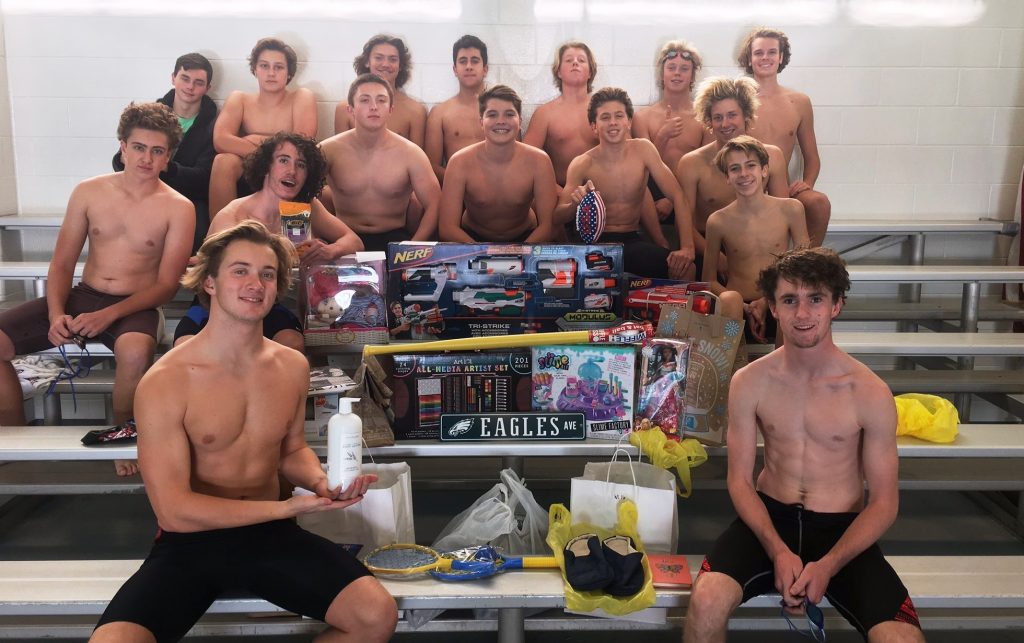 The Ocean City High School boys swimming team is hoping to do a lot of good things in the pool this winter.

But no matter what the Raiders accomplish in that regard, there’s no way it’ll top what the team did this week outside the pool.

The Raider swimmers engaged in a quickly-organized effort to aid two families in the South Jersey area through a holiday season giving program established by the Salvation Army of Atlantic City.

In a matter of days, the members of the team, with help from their parents and families, accumulated toys, gift cards, clothes, toiletry items and other necessities for donations.

“A lot of it was stuff that you or I might take for granted but unfortunately there are people in our area that can’t do that during the holidays,” said Ocean City boys swimming coach Shane McGrath. “Some of it was normal Christmas presents and others were basic necessities.”

The idea to try to help a couple of local families came practically by accident.

“I literally saw something on Twitter, where there was a video of a kid down in Georgia,” McGrath said. “He didn’t have financial issues but it was some type of health ailment. So I thought as a team it would be nice to do something and give back to our community.”

The Salvation Army wanted the items delivered this week in order to have them reach the needy families in plenty of time for Christmas, so the team didn’t have much time.

“At first we didn’t know how to go about this because we hadn’t done it before,” McGrath said. “I looked up online and the easiest way was to do it through the Salvation Army. But we needed the gifts by Friday and I didn’t know if we could turn it around that quick.”

The team certainly did.

“At first, I thought if we didn’t get enough that I’d just run out and get a couple things to make sure we have enough,” McGrath said. “Now I feel like I should be embarrassed to have had that thought because the response from the kids and their families was just overwhelming. Gift cards, toys, even slippers and lotion and candles – everyone came through.”

Matt DiMarino, a senior on the swimming team, said the charity project galvanized the Raiders.

“Obviously during the Christmas season, for us we’re very thankful that have each other and our health and our wealth,” DiMarino said. “We all looked at this as an opportunity to give back to something bigger than ourselves, and it wasn’t just going to impact one person or two people but two whole families. Helping them have a Christmas they might not have had without what we gave them is one of the most humbling things we could do as a team.”

DiMarino said he wasn’t surprised with what the team could do on just a few days notice.

“We have such a good group of guys,” he said. “They love to help not only each other but they come together to try to make everybody else’s day better. This was one more thing we could do as a team to not only make us closer but to make an impact on people’s lives.

“I’m not surprised at all that we were able to pull it off. We win as a team and we lose as a team and we give as a team. It was a total team effort. I don’t think we could have asked for any more from each other for the first time doing this. And not just the team. Coach McGrath and our parents went out of their way for this. Obviously without the parents none of this would have happened.”
Ocean City lost its first meet of the season earlier this week, falling to rival Mainland. The Raiders next face Millville on Tuesday.

In between they scored a huge victory.

“You know you have good kids on the pool deck and in the weight room but at the end of the day it’s not always about the sport itself,” McGrath said. “It’s about knowing that kids understand that there are other people out there that aren’t as fortunate as they are and that you should do what you can to help.

“It’s very overwhelming the way they responded. So many people stepped up to the plate. I couldn’t be prouder of what they did.”