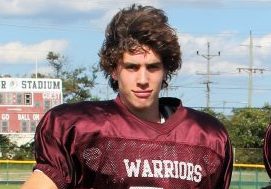 Lopez, a senior wide receiver and defensive back, is one 65 players statewide recognized for the honor.

According to the release, players were nominated by their coaches throughout the 2017 season and were evaluated based on criteria that includes football performance, academics and community service.

Lopez and the other Mini Max Award recipients will be honored at a banquet scheduled for Jan. 28 in Princeton Junction. The Maxwell Club’s New Jersey High School Player of the Year will be announced at the banquet.

Lopez scored two touchdowns for the Warriors this fall.

Lopez attends the Cape May County Technical High School. He qualifies to play for Wildwood’s football team as a resident of Wildwood Crest.