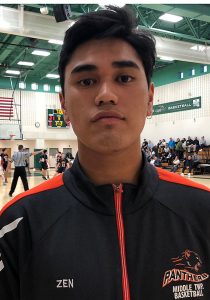 Zen Te Hira is playing basketball almost every day for the first time in his life.

“Back home, we usually practice three times a week and have one game a week on a Friday,” Te Hira said. “If we’re lucky we’ll get a game on the weekend. But we don’t play that much compared to here.”

Te Hira, an international exchange student from New Zealand, is a 6-0 senior guard for the Middle Township High School boys basketball team. He is the nephew of former longtime Middle Township assistant coach Rewi Thompson. He is living with Thompson’s family. Thompson is the brother of Te Hira’s mother, Veronica. Thompson and Veronica both attended Middle Township in the 1980s as exchange students from New Zealand. Thompson stayed in America, while Veronica returned to New Zealand after graduating from then-Richard Stockton College, playing four seasons of basketball there.

Te Hira arrived here in August, giving himself some time to adjust prior to beginning school in September.

“My uncle and aunt have been a lot of help,” Te Hira said. “They’ve made it really easy. I couldn’t imagine living with anyone else, like a host family or something like that. That would be too different for me. My aunt and uncle have made it easy for me. They look after me and stuff.”

Te Hira is a key contributor for Middle’s basketball team. An occasional starter, Te Hira is in the regular rotation in every game.

“He knows how to play,” Middle coach Anthony Farmer said early in the season. “He definitely doesn’t hurt you out there. And he plays smart.”

Te Hira, who also plays rugby in New Zealand, has had to get used to the American style of basketball.

“The intensity is way more here,” he said. “Skill-wise I think we’re quite similar in New Zealand but because basketball is done every day here that makes the players here a little better.

“When I got here it was an adjustment. I had about a month and a bit to get acclimated. I worked out every day with my uncle or my cousin (Jason), so that got me a little more used to what it’s like here.”

Te Hira, 18, had visited the United States in the past, so he knew a bit of what to expect. But he’s thankful for the experience of going through a school year and a basketball season at Middle.

“I’m really enjoying the experience, not only the basketball aspect but school and the social kind of thing,” he said. “It helps a lot practicing and being around basketball. It helps me stay in shape and keep fit so I enjoy that as well.”

“I got to enjoy the end of the summer when I got here and I’ve enjoyed the snow,” he said. “Where I live we get no snow.”

Te Hira feels as though he’s an integral part of Middle’s team. In a recent game against Pleasantville, he made tough layups after getting offensive rebounds.

“I’m feeling quite good and confident about it,” he said. “Now that we’re about halfway through the season I feel a lot more comfortable. I think I’ve kind of earned my spot and gotten used to the team and how the game is played over here.”

Te Hira hails from the city of Wellington. His father, Robert, is a carpenter, and his mother works for the Auckland Council, which oversees the disbursement of funding for sports and other programs. The family also manages rental properties. Te Hira is the middle of three children. His sisters are Maia, 22, and Jade, 11.

Te Hira said he has yet to make plans beyond this school year.

“At the moment, if the opportunity comes I would definitely stay here (for college) but at the moment I really haven’t decided what I might do,” he said. “I’ll sit down with my parents and my uncle and decide what I’m going to do.”