The Ocean City boys turned in another one of their impressive comebacks tonight, coming from 19 points down midway through the third quarter to beat Oakcrest, 63-57, for their fifth straight win. 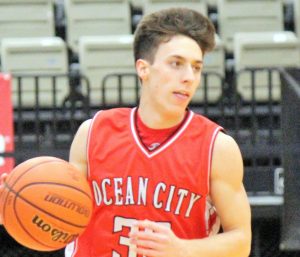 John Bruno’s boys (11-3) made up 11 points in the final four minutes of the third quarter, including a twisting, overhead layup by Jake McQuarrie (above) that spun off the glass into the basket just as the buzzer sounded to end the quarter. Earlier, McQuarrie seemed to jump five feet off the ground to tap an Oakcrest pass into the backcourt, then run down the ball for a layup. McQuarrie also drilled a three-pointer and made three free throws in the fourth quarter to help seal the win.

Luke Varallo led OCHS with 15 points, including a three-pointer in each of the first three periods. McQuarrie finished with 14, Graham 10, Greenling and Tom Jamison eight each and Joe Sacco seven points as Ocean City had balanced scoring again.

The OCHS girls (11-3) ran out to a 16-2 lead after one quarter against the Falcons and led 35-10 at halftime. Molly Hoffman and Abbey Fenton each scored nine points, Emma Finnegan scored eight with Danielle Donoghue and Kilie Wyers each adding six. Hoffman had four rebounds with Donoghue, Mickey Baker and Delaney Lappin each getting three assists. Donoghue and Lappin also had three steals.

FREE THROWS: The OCHS boys play a makeup game at Vineland on Monday (5:30). They are at home on Wednesday (6pm) against Cedar Creek …. The Raider girls play Paul VI at Holy Spirit tomorrow (Saturday) at 5 p.m. in the 97.3-ESPN Girls Shootout. The girls next home game is Feb. 7 with Lower Cape May …. box scores, schedules, results, stats and more are available at http://www.oceancitysports.com/OCDiary.html.