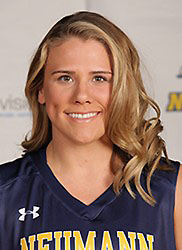 Lauren Legler watched from the sidelines as her teammates on the Middle Township High School girls basketball team won the 2012 South Jersey Group II after she broke her foot late in the regular season.

Two years later, she was forced to sidelines again with another foot injury, missing a good portion of her senior season as well.

So you can imagine how elated Legler was Saturday when she made a 19-foot jump shot from the right wing to reach 1,000 career points for the Neumann University women’s basketball team in an 87-45 win over Notre Dame (Md.).

“It makes it a lot more meaningful because I never got to experience that in high school,” Legler said in a telephone interview. “I felt like I missed out on winning South Jersey. I was a part of that team and I had started for that team but I didn’t play in the (state playoff) games. Then I would’ve gotten 1,000 points my senior year but then I got hurt again. I left high school without accomplishing things I wanted to accomplish because I got hurt. So to overcome so many obstacles with this sport, it mean so much to me to be able to get this in college.”

Legler, a 5-7 shooting guard/small forward, has been a four-year starter at Neumann, located in Aston, Pa., a short drive from the Philadelphia Airport. She has averaged in double figures in every season of her career. This season, she has posted 10.2 points and 2.2 rebounds per game while averaging a team-high 28.3 minutes per game. She leads the team in three-pointers made with 32 and is shooting 31.1 percent on three-point attempts.

“College basketball has been great,” Legler said. “I started from the day I got there so it’s been great from that standpoint. But there’s definitely been challenges that have come along with it, like all the schoolwork and basketball.”

She’s done well in that regard. In addition to her basketball success, Legler is carrying a 4.0 grade point average as an elementary education major and has been named a Colonial States Athletic Conference all-academic selection three times. She’s on pace for a fourth.

“It’s been a huge time commitment and a challenge to stick with it but getting this accomplishment has made it all worthwhile,” Legler said.

Legler said she is extremely pleased with how her college career has progressed, playing for a Neumann team that has been competitive in the CSAC in all four of her seasons there.

“It was more difficult than I thought but I feel like I’ve played way better in college than I did in high school,” she said. “It’s a privilege to be on a college team. A lot of people can make a high school team and play in high school but playing in college has given me a bigger sense of confidence to be able to play. It’s challenging because all of the players you’re playing against have been recruited to go there and they’re all good basketball players.”

Legler was quick to credit her parents, Tim and Jen, for helping her navigate her college basketball experience. Jen was a star player at Middle and both of her parents played collegiately at LaSalle. Tim went on to play 10 seasons in the NBA and was the NBA Three-Point Shootout winner in 1996. He’s currently an NBA analyst for ESPN.

“They’ve definitely been the ones that have kept my mind in the right places and they’ve really helped me with sticking it out for all foury ears,” said Legler, whose brother, Ryan, a Wildwood Catholic graduate is also playing college basketball at Rowan University. “They kept pushing me to do it and telling me that in the end it would all be worthwhile, so I owe a lot of this to them. They’re the ones who first taught me how to play at age 5 and they’ve been there with me through this whole thing. They’ve kept my head in the right place and helped make it so much more enjoyable for me.”

Legler is contributing to a Neumann team that is one of the top Division III programs in the region. The Knights are currently 14-5 overall, 9-1 in the CSAC. They have six regular-season games remaining. The team will participate in the CSAC Tournament in a few weeks.