CoastSportsToday.com Athlete of the Week: Patrick Holden, Lower Cape May

With his next win, St. Augustine Prep’s Paul Rodio will become No. 2 in New Jersey boys basketball history in victories.

Rodio got No. 900 on Monday with a win at Egg Harbor Township on Monday. He can get No. 901 on Thursday in Millville. Whenever the 901st win comes it will place him behind only Bob Hurley, who won 1.185 games at St. Anthony of Jersey City. 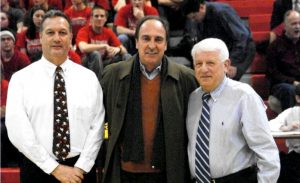 Most people know Rodio as the white-haired little guy who usually tosses his sport jacket sometime in the first half and frequently dumps his tie during the second half. He is a fiery coach who doesn’t miss a thing on the court and is a master at keeping his players involved in each game.

Some of his players have come from other high schools. Almost all of them come from other sending districts. St. Augustine, after all, could not survive on students who live in Richland. And the continued success of its sports programs – especially basketball – plus the constant growth of its campus, make it an attractive destination for high school boys.

Rodio has won 14 South Jersey championships, four more than any other Cape-Atlantic League coach. His five state championships are two more than Gene Allen, Tom Feraco and Ken Leary, who share second place. They named the gymnasium after him at St. Augustine Prep and he takes that tribute seriously, acting like a gracious host to the people that enter his gym.

But Rodio is not just about victories and championships, though that is the goal of all sports. He is proud of the Cape-Atlantic League and roots for other league teams to do well. He cares about the young men who decide to test their talents against some of the best, even if they decide to leave. At one time, the NJSIAA required players who transfer to sit out 30 days if they were varsity letter winners at the school they were leaving. On more than one occasion, Rodio has taken back a letter from a player who transferred so that he didn’t have to sit out the 30 days at his new school.

He was emotional on Monday in postgame interviews when speaking about his teams. The players and coaches who have been part of those 900 wins have, of course, played a big role in Rodio’s success, as he is quick to point out. But he is the magnet, the coach who has built a highly-successful program, the type of program that attracts those student-athletes and assistant coaches.

Paul Rodio is a source of pride for CAL and NJSIAA basketball. He not only has won but more often than anybody else in South Jersey but he handles it like a true champion.

And, with the talented freshmen class he has, don’t think that Hurley’s 1,185 wins is beyond reach.

Gene Allen has had a tough January.

His 2017-18 Vikings are one of the best teams in South Jersey but in the first two weeks of the new year he has seen one of his key players – David Aikens – transfer to Putnam Science Academy in Connecticut where he will get a fifth year of high school level basketball before accepting an offer from St. Francis University.

Atlantic City High School has the best regularly-used gymnasium in South Jersey, probably the very best in the state. But those two burst pipes did so much damage to their playing court that no games will be played on it the rest of this season.

The Vikings have been playing home games at the Dr. Martin Luther King Complex, a nice middle school facility but with only 450-500 seats. That could prove a problem for home NJSIAA tournament games or the opening round of the CAL Tournament. Possibly ACHS could try to play some of those games on another high school court.

It has already been a problem for the Battle by the Bay.

Its games have been moved to Stockton on Feb. 2-4. The Friday night and Sunday afternoon doubleheaders will remain the same. But Stockton’s teams play on Saturday (they’ve moved the Ospreys’ doubleheader to noon) forcing the elimination of the Ocean City-Mainland girl-boy doubleheader. Three games will be played on Saturday night, featuring St. Augustine, Wildwood Catholic and Linden.

Ocean City and Mainland will re-schedule their games to home courts. The new Battle by the Bay schedule is here –  http://www.primeevents.net/battlebythebay.html.

It seems most of the area showcase events this season have had conflicts and scheduling problems.

The Seagull Classic faced snow problems but John Rodio and his staff did a great job of still putting together a good event. Full box scores, produced by Joe Fussner, are here – http://www.primeevents.net/seagullclassic.html.

The Shoot Down Cancer Classic had a big-time program cancel out at the last minute and faced Sunday competition from the NFL conference championships, but still produced a quality event. Check out the final box scores here –  http://www.primeevents.net/sdc2018.html.

This weekend at Holy Spirit, the 23rd annual 97.3-ESPN Girls Shootout will be held at Holy Spirit after a number of schedule changes necessary for many different reasons. There will be three games Saturday starting at 1 and a full five-game schedule on Sunday starting at noon. The complete girls shootout schedule is here – http://www.primeevents.net/girlshootout.cgi.

And coming up on February 10th is the War vs The Shore at Mainland, featuring girls teams from the CAL against those from the Shore Conference. That lineup is here –  http://www.primeevents.net/Mainland.html.

Basketball Glossary: Here are the meanings of certain phrases you might hear being offered by a high school basketball fan and directed at a game official or officials.
“Call it both ways” – You need to call more fouls on the other team.
“Let them play” – Why did you call that foul on my team?
“That’s not your call” – Why did you make that call against my team?
More to come ….