Kyion Flanders (left) and Tyler Tomlin combined to average almost 40 points per game this season and led Wildwood to a share of the Tri-County Classic Division title. 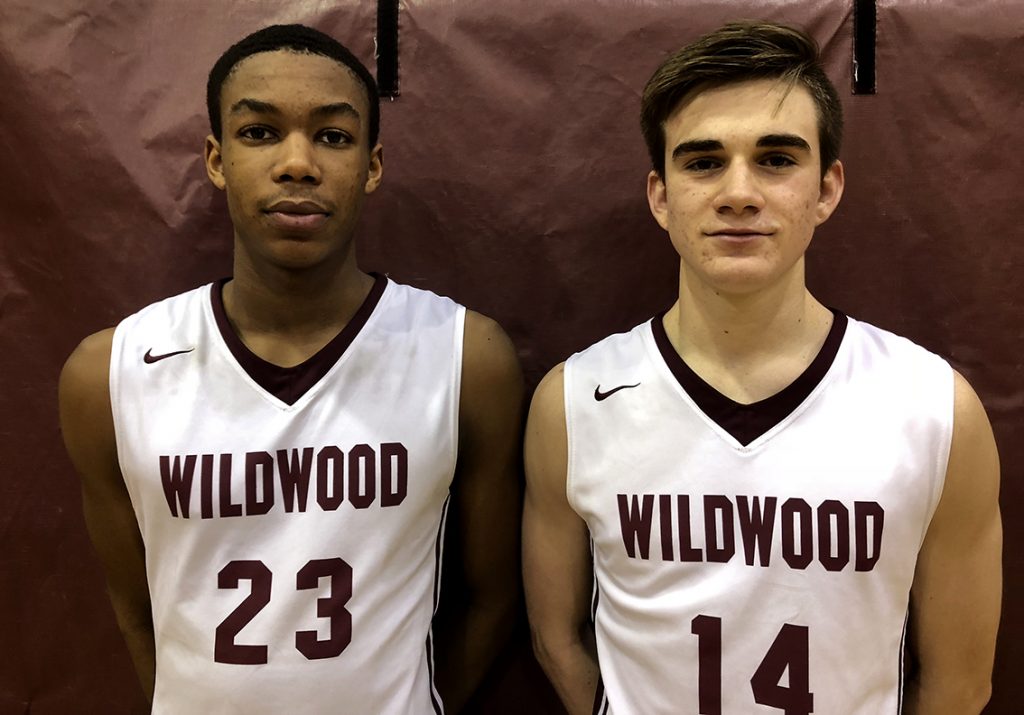 WILDWOOD — The Wildwood High School basketball teams each advanced in the South Jersey Group I playoffs Monday evening, although both teams certainly did not play their best games.

The Wildwood girls, seeded third in the tournament, knocked off No. 14 Buena, 48-30, despite shooting only 21 for 59 from the floor, missing all but one of their 17 of their three-point attempts.

And the fourth-seeded Wildwood boys, after leading by 13 points at halftime, found themselves ahead by just three points near the end of the third quarter but finished the game on a 30-9 run to beat No. 13 Schalick, 80-56.

In the girls game, Buena scored the game’s first five points but Wildwood responded with 13 straight points and eventually grabbed a 19-9 lead after the first quarter. But the Lady Warriors slogged through much of the rest of the game. Wildwood had 18 turnovers, 11 in the second half.

Wildwood (20-7), which reached 20 victories for the third time in four seasons, got 14 points from Maddie McCracken and 12 apiece from Jenna Hans and Tracey Young. Young also had 14 rebounds.

The Lady Warriors will next host No. 6 Woodbury on Wednesday at 5 p.m. Woodbury was a 59-57 winner over LEAP Academy.

In the boys game, Wildwood (17-9) seemed comfortably in control after taking a 41-27 lead at halftime on Schalick. But the Cougars (6-19) went on a 20-9 run to get to within three points with less than a minute to play in the third period.

Wildwood’s Tyler Tomlin (19 points) then hit a three-pointer to beat the third-quarter buzzer and the Warriors went on to outscore Schalick 27-9 in the fourth quarter.

Kyion Flanders, held to eight points through three quarters, exploded for 12 in the fourth to finish with 20 points.

Andrew Zielinski added a career-high eight points off the bench for Wildwood. Will Long and Keniel Rivera also each had eight points.

Wildwood will host No. 5 seed Paulsboro on Wednesday at 7 p.m. Paulsboro was a 68-56 winner over Lindenwold in its tournament opener.

Both Wildwood games Wednesday will air live on 98.7 The Coast radio, with a live video stream available online at CoastSportsToday.com.