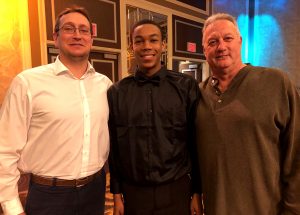 Two current coaches, one former coach, a player and an official from Cape May County were among the honorees at the South Jersey Coach-Official Basketball Summit awards banquet Saturday evening at the Tropicana Resort and Casino in Atlantic City.

The summit, hosted by South Jersey Basketball Summit Inc., was created six years ago as an initiative to improve relations among high school basketball coaches and officials.

Kyion Flanders, a senior guard from Wildwood, was given one of two Paul Rodio Boys Scholarships, receiving $1,000 toward his college education.

Lance Bailey, a Lower Township resident and teacher at Lower Cape May Regional High School, was also recognized as one of two cadets of the year for Cumb-Cape Board of Officials 196.