Emily Cimino is regarded as one of the top softball pitchers in the Cape-Atlantic League.

But it’s her bat that has led her to accepting a partial scholarship to play at the Division I college level.

Cimino, who recently began preparations for her junior season at Wildwood Catholic High School along with the rest of her teammates, has verbally committed to play college softball at Lehigh University.

“It’s crazy to think that (choosing a college) is already here,” Cimino said. “But it’s been a dream of mine since I first started playing to play in college. It’s great to see that all that work pays off.” 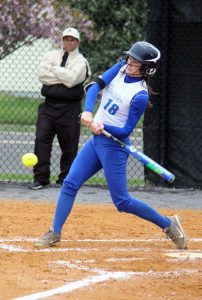 Cimino was one of the major contributors to a Wildwood Catholic team that won the program’s first South Jersey championship last spring. She went 11-5 with a 3.30 ERA on the mound, striking out 120 batters in 104 innings.

But as good as she was as a pitcher, Cimino was an even more potent threat as a hitter. She batted .589 with 43 hits, seven home runs, 31 RBI and 31 runs scored for a team that went 18-6 and also won the Cape-Atlantic National Conference championship.

“I’ve been around a lot of kids in softball and I’ve never seen a kid work as hard as that kid does. She’s a mad woman when it comes to hitting,” Wildwood Catholic coach Matt Megines said with a laugh. “She’ll go 3 for 4 in a game and then she’ll go home and hit in her garage because she’s mad about that one at bat she didn’t get a hit. She’s an animal about everything — hitting, fielding and pitching.”

Cimino, a resident of Estell Manor, plays club softball for New Jersey Gators, primarily as a first baseman, the position at which she’s projected to play for Lehigh.

She’s also rather strong in the classroom at Wildwood Catholic, carrying a 4.43 grade point average while taking advanced placement or honors classes.

“She’s probably one of the smartest kids I’ve ever coached,” Megines said. “She’s not just an athlete. She’s well rounded and she’s very smart. … Lehigh’s not an easy school to get into, almost like an Ivy League school. Academically she has her head on straight and she knows exactly what she has to do, When she came to Catholic she had a plan and she’s sticking to the plan and doing a great job.”

“I liked (Lehigh) when I first got on campus,” Cimino said.

Cimino said she is glad to have made her college choice while still having two seasons of high school softball left to play.

“It’s nice to be able to go out and play and not really worry about who’s watching and making sure you’re doing well,” Cimino said. “I can just go out and play. That’s the fun part. The behind-the-scenes work is done.”