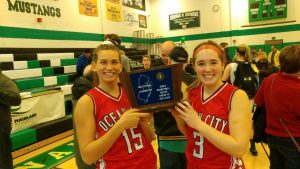 The Ocean City High School girls basketball team opened a small lead in the first half, built it to 10 points, and then held off previously undefeated Mainland for a 36-32 win in the NJSIAA South Jersey Group 3 championship game before a packed house in Linwood. It was the Raiders’ third straight South Jersey title.

It was also the fourth time the two teams played, the first three finishing in overtime wins for the Mustangs.

The win advanced Ocean City (22-8) into the NJSIAA state semifinal on Wednesday at 7 p.m. at Deptford Township High School against Ewing (25-5), the Central Jersey champions. The Raiders defeated Ewing, 58-57, in overtime last season in the state semifinals. With losses Monday night by the boys teams from Atlantic City, St. Augustine and Lower Cape May, the OCHS girls are the only Cape-Atlantic League team remaining in the NJSIAA Tournament.

Senior Kilie Wyers made four free throws down the stretch in the fourth quarter to seal the victory. Senior Gabby Boggs had scored six points and senior Francesca Geromini four to bring Mainland to within two points.

OCHS got off to a good start behind a strong first quarter by sophomore Emma Finnegan. She scored five of the Raiders’ seven points and battled on the boards. Junior Danielle Donoghue and sophomore Delaney Lappin each scored five points in the second period with Donoghue tossing in an acrobatic three-pointer at the buzzer for a seven-point halftime lead.

Finnegan paced Ocean City scoring with nine points. Tori Rolls scored eight, Donoghue and Lappin each contributed seven, Wyers scored four and sophomore Abbey Fenton two. Mainland did a good job of limiting Ocean City’s three-point shooting. Aside from Donoghue’s buzzer-beater, the only other OCHS score from beyond the three-point arc was by Rolls in the second quarter.

Mainland’s talented 6-4 sophomore Kylee Watson led all scorers with 14 points but the Raiders limited her to just a single point in the second half. She also committed her fourth foul early in the final period. Watson needed 15 points to reach 1,000 for her career and fell just short. She will enter her junior year with 999 points. Boggs added nine and Geromini seven for the Mustangs.

Video segments from the game are below – three plays from the final minute plus post-game interviews with Baruffi, Lappin and Rolls.

FREE THROWS: Paul Baruffi has now won seven South Jersey titles, the most by any girls coach at a Cape-Atlantic League school. His record in NJSIAA Tournament play is 45-16 …. the CAL record for consecutive South Jersey titles is four by Absegami (2005-08) and Atlantic City (1979-82) …. there has not been an undefeated CAL girls team win a South Jersey title since Middle Township in 1995 …. the last time an OCHS basketball team played a team four times in one season was in the 1954-55 season when Ocean City played Wildwood four times …. the game started at 4pm??? …. box scores, schedule, results, stats and more are available at http://www.oceancitysports.com/OCDiary.html.