Jordan Robertson was a part of a Cape-Atlantic League championship team at Wildwood Catholic High School in 2014.

Now he hopes to be part of a Patriot League champion.

Robertson and his teammates on the Colgate University men’s basketball team will face Bucknell this evening in the Patriot League Tournament championship game. The winner earns the league’ automatic bid to the NCAA Tournament.

The contest is scheduled for 7:30 p.m. at Sojka Pavilion on Bucknell’s campus and will be televised live on CBS Sports Network. 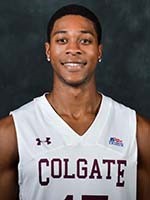 Robertson, a 6-4 senior guard, is a key role player for the Raiders. He has played in 30 of the team’s 31 games, with one start, and is averaging 5.3 points per game. He enjoyed a three-game stretch in mid January in which he scored in double figures. He also scored a career-high 20 points in a win at Boston University on Feb. 7.

Colgate reached the Patriot League title game behind two earlier tournament wins. Robertson played 15 minutes and scored two points in Colgate’s 76-54 win over Lafayette in the quarterfinal round and saw nine minutes of action and scored four points in a 62-55 win over Holy Cross in the semifinal game.

Robertson scored 1,135 career points as a high school player at Wildwood Catholic. He averaged 18.5 points and eight rebounds per game as a senior, leading the Crusaders to the CAL playoff tournament title. He was named South Jersey Player of the Year by multiple media outlets.