On Monday the NJSIAA Group 3 Tournament continues in boys tennis and Tim Kelley’s Raiders (14-3) will host Toms River South (11-5) on the courts across Atlantic Avenue from the high school. The winner will face either Moorestown (19-2) or Highland (6-11) on Thursday. Moorestown is ranked No. 1 in South Jersey and No. 8 in the state. On Tuesday the OCHS boys tennis team will travel to Cape May Court House to face undefeated Middle Township in a match that will decide the Cape-Atlantic League’s National Conference championship. The Raiders only conference loss was to Middle.

There are two tournaments on Tuesday involving baseball and golf.

The OCHS baseball team (15-3) will need to shake off its tough loss to Mainland when it travels Tuesday to Pennsauken to play Bishop Eustace Prep (16-2) in the opening round of the 45th Annual Joe Hartmann Diamond Classic. Eustace is ranked No. 1 in the state by NJ.com. The game was supposed to be played on Saturday but weather forced a postponement. The winner will play West Deptford (16-4) on Saturday at 10:30 a.m. at Deptford. The winner of Saturday’s game will play on Sunday at 1 p.m. at Deptford in the tournament semifinal and that winner will jump on the bus and drive to Eastern to play the championship game at 5 p.m. The other two CAL teams in the Diamond Classic were winners on Saturday – Holy Spirit over Shawnee and St. Augustine over Gloucester Catholic.

Andrew Bristol’s baseball team can also clinch the CAL National championship by beating Cedar Creek on Monday or Oakcrest on Thursday, both on the road.

The Raider golfers will be out to defend their South Jersey Group 3 championship Tuesday at Running Deer Golf Club in Pittsgrove. Ocean City has been having one of its best seasons, including its first-ever win over St. Augustine Prep.

The girls lacrosse team (15-1) will host either Central (5-10) or Toms River East (2-11) on Friday in the first round of the NJSIAA Group 3 Tournament at Carey Stadium. Ocean City defeated Central in last year’s tournament. The Raiders have never won twice in one year in the NJSIAA Girls Lacrosse Tournament. If they win Friday’s opener, Alyssa Morrison’s CAL champions will host either Seneca (12-5), Cherry Hill West (9-8) or Winslow Township (2-12) on May 18. Seneca is ranked No. 10 in the state.

Also on Friday, the boys and girls track teams will compete in the CAL Championship Meet in Bridgeton and the crew teams will travel to Philadelphia for the Stotesberry Regatta, which continues on Saturday.

The past week was an interesting one for the Raiders. 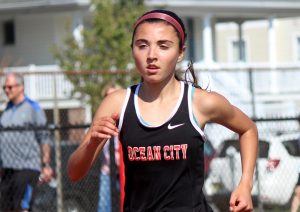 Check out Brian Cunniff’s photo and video coverage of the Cape May County Track championships – https://coastsportstoday.com/2018/05/7441/.

Other Friday results, including the historic golf win over St. Augustine, are here – https://coastsportstoday.com/2018/05/raiders-lose-3-times-to-mainland-gain-historic-wins-in-golf-track/.