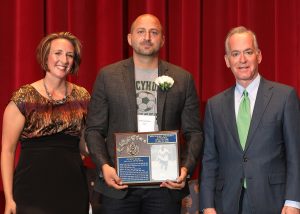 Maher, a 1997 graduate of Middle, was inducted into the Mercyhurst University Athletic Hall of Fame during a ceremony held during the school’s Reunion Weekend activities earlier this month.

Mercyhurst, a Division II program, is located in Erie, Pa.

Maher, Mercyhurst’s career goals leader with 51 at the time of his graduation, was a first team Division II All-American after scoring a still-program record 24 goals in 2001 and was twice named the Great Lakes Intercollegiate Athletic Conference Offensive Player of the Year. He helped the 1998 team go 17-4-1, win the GLIAC title and advance to the Final Four. Maher and his teammates on the ‘98 team were also inducted as a group.

Maher played three games for the United States U23 men’s national team, scoring once, and was also a member of the U.S. National Futsal Team in 2007.

Maher is considered one of the best high school players in Cape May County history. A four-year starter at Middle, he scored 71 career goals, including 32 as a senior in 1996.

Maher’s father, John, coached Middle Township’s boys soccer team for 15 seasons from 2002 through 2016. Maher and his father are both members of the South Jersey Soccer Hall of Fame.

Maher, 39, currently resides in Philadelphia with his wife and three sons. He is the Chief Growth Officer and Head of Incubation for 1776, the nation’s largest network of incubators.