Golf and tennis are two of the high school sports a person can pretty much play throughout life. At Ocean City High School this spring the athletes who played the two sports not only prepared for a life on the course or the courts but they did it with success.

The golf team was 14-2, its best record since 2009, and finished third in the NJSIAA South Jersey Tournament. The Raiders had won that tournament last year and this marks the first time an OCHS golf team finished in the top three in NJSIAA competition in consecutive years since Ralph Carson’s teams were back-to-back winners in 1979-80.

It was a seven-stroke loss to Egg Harbor Township that cost the Raiders a share of the conference title. Ocean City defeated EHT by 18 strokes in their other meeting. St. Augustine Prep won the conference but OCHS defeated the Hermits for the first time in history, 152-154, in the final dual match of the season. The Raiders won the county tournament.

The boys tennis team (15-5) chalked up its most wins since 2010 and split a pair of NJSIAA Group 3 Tournament matches. They lost twice to Middle Township, the undefeated conference champions. 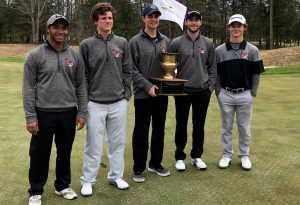 The big story on the golf team was Jack Sullivan (far right, above, with Isaac Roster, Craig Nordberg, Matt Blaker, Josh Brown and the county trophy).

The talented senior left his name on some pretty impressive lists when he graduated. Sullivan’s 38.61 average for nine holes this season was the seventh best ever by an OCHS golfer. Last year, as a junior, his average was 37.90, which is the fifth best all-time. Only two other Ocean City golfers are included two or more times among the all-time top 10 in seasonal average – Dom DiGiacomo (1st and 2nd) and Jeff Michner (3rd, 6th and 8th).

In addition, Sullivan had the Raiders’ low score in 2016 as a sophomore. Only three other golfers have done that at OCHS – DiGiacomo, Michner and Jim McKeon. Michner and McKeon actually did in four straight years.

So, losing Sullivan will leave a big hole in the Ocean City lineup. But he wasn’t the only one to accept a diploma on Monday. Isaac Royster, Matt Blaker, Josh Brown, Craig Nordberg and Will McGonigle are also gone, putting coaches Ed Ritti and Bryan Chojnacki (62-24 in five seasons) into a rebuilding mode. They are two other coaches hired by Dr. Chris Lentz who are continuing Ocean City’s sports success. Junior Kasey Clifford and sophomore Luke Neff will be the two returning varsity players. 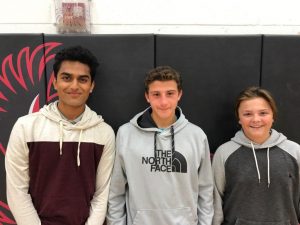 Tim Kelley, who took over the boys tennis job when George McNally retired after 17 seasons, will face pretty much the same challenge. Three of his top players – Tanner Tomassi, Manav Randheri and Ryan Roller – are all graduates. They combined for 40 victories this spring. Rafa Cortez, an Exchange Student from Spain, will also not be around in 2019.

But freshman Mike Jacobsen had a good season, mixing singles and doubles. Juniors Richard Flemming and Luke Bowman and sophomore Joey Kelly had success in doubles and should contend for singles spots. 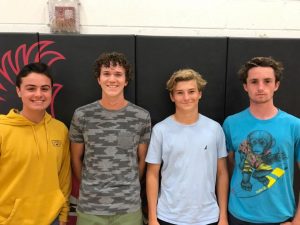 Ritti and Chojnacki have created a program over the past five seasons that not only improved the golfing skills of the players involved but also developed a love of the sport and knowledge of its rules and history. They have joined other Ocean City coaches in making good use of social media. And Kelley, also an assistant with the football and girls basketball teams, got off to a good start in his first season.

Rebuilding may be coming for OCHS golf and boys tennis but the right coaches are in place to make it smooth and steady.

Coming tomorrow – a look at 2018 OCHS boys and girls track.