Nunan, who was selected by the Los Angeles Angels on the 12th round of the draft, will fly to Arizona tomorrow to sign a contract. 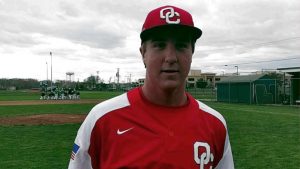 “I’ll be going into their extended spring training program,” he said, “sort of like a training camp. They told me I’d come every morning to throw, lift and work out. I will probably throw a couple of innings in a couple games every week.”

The Arizona Rookie League is a short-season league. The Arizona Angels opened their season on Monday and will play until August 27. The team is managed by Jack Santora, who played for the Lakewood Blueclaws in 2003 and the Newark Bears from 2003-2008. He won two European Baseball championships playing for the Italy National Team.

Nunan, who celebrated his 18th birthday last month, was 5-0 this season for Andrew Bristol’s Raiders with a 1.49 earned run average. The 6-foot-6 lefthander struck out 74 in 37 innings.

“The Angels are going to pay for me to go back to school. I think that is the best option for me. I don’t know exactly where I will take classes but I know that Northeastern University has 100 percent online classes, so I’m considering that. Plus, during the off-season, when I’m home, I might take some classes at Atlantic Cape Community College.”

“When we sat down after the draft I was planning to try to get him to go to college, to take the scholarship to Delaware” said Bristol. “But he had everything pretty well worked out regarding his education and the Angels made him a great offer. It is all very exciting.”

Nunan also received a sizable signing bonus, reportedly a little bit higher than the typical 12th round pick. But he doesn’t plan on making any big purchases.

“My mom has been busy so I can’t even take her out to dinner before I leave,” he said. “I’m not going to do anything crazy – no plans to buy anything. Just put it away and go out there and concentrate on playing some baseball.

“All of this is the answer to a dream. It’s awesome. I can’t wait to get started and see what the future has in store.”